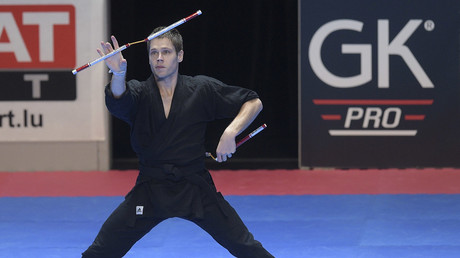 Things are looking up for America’s ‘ninjas.’ A federal judge has ruled that New York’s statewide ban on nunchucks – the martial arts weapon made famous by Bruce Lee – is unconstitutional.

The ban was initially adopted in 1974 following fears that the surging popularity of martial arts films would inspire roving packs of youths to unleash mayhem in the streets of New York. However, the restriction had since been largely forgotten.

The ban was challenged after James Maloney was charged with possession of nunchucks at his home in 2000. He filed a legal complaint against the Nassau County District Attorney in 2003, and appealed all the way to the Supreme Court. They ruled against him, but – after a Second Amendment decision in 2010 shifted the legal landscape to allow for reconsideration – Maloney filed an amended complaint the same year.

Maloney was seeking to overturn part of the law that specifically banned nunchucks, even in private homes, where – it could be argued – the only person likely to get hurt was the nunchucks-wielder themselves.

Also on rt.com
Drones over Manhattan: NYPD takes flight, but says it’s not for spying


On Monday, Brooklyn Federal Judge Pamela Chen declared that the state law banning the possession, manufacture, transportation and disposal of nunchucks was a violation of the Second Amendment.

Maloney, who is now a professor at the State University of New York’s Maritime College, is thrilled to be able to let his inner ninja come out and play. He wants to teach his own form of martial arts, called ‘Shafan Ha Lavan,’ to his sons, using nunchucks he made himself. He told the Associated Press that he can’t believe his luck, but remained shocked that such a law could have come into existence in the first place.

“How could a state simply ban any and all possession of a weapon that had a very long and proud history as a martial arts weapon, with recreational, therapeutic and self-defense utility?”