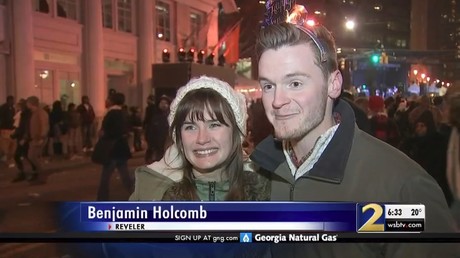 Atlanta realtor Hunter Fisher was pleased to be interviewed by local news station WSBTV on New Year’s Eve – until he discovered he had been given a fake name by the network because it didn’t believe his own could be real.

“Emma and I made it on TV but the camera guy didn’t believe my name was Hunter Fisher so he just made one up for me,” Fisher wrote in a tweet that has since been shared over 28,000 times.

READ MORE: Fireworks, freezing and flames: How the New Year was celebrated across America (VIDEOS, PHOTOS)

WSBTV gave Fisher the name Benjamin Holcomb instead, which is also the name of a California author. Someone pointed this out on Twitter, and the real Holcomb joined in with the fun.

Fisher was featured in the channel’s New Year’s Eve coverage, and told the network it was his first time seeing Atlanta’s signature large peach drop at the celebrations.

Curiously, none of the other people featured in the segment were given any names, real or otherwise.