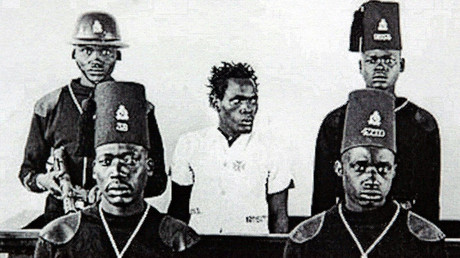 Guardian columnist George Monbiot is the latest to decry Facebook’s increased censorship after a video he made, on the crimes of European colonialism, was taken down by the tech giant.

In his tweet, following the removal of the video Monbiot wrote: “Here’s our video about the airbrushing of colonial history, that @facebook has gone and airbrushed.”

The video, produced by Double Down News, shows Monbiot talking to the camera, and is intercut with often gruesome film clips, as he goes through colonial history detailing atrocities committed by Europeans.

READ MORE: ‘Black history is British history’: Kids should be taught about slavery and the Empire – Corbyn

The journalist tweeted that he had not received an “explanation or a right of appeal.” Going on to implore fellow journalists Owen Jones, Medhi Hassan, left-wing publication Novara Media and activist Peter Tatchell to retweet his video.

Monbiot’s video initially looks at the crimes of Italian explorer Christopher Columbus – namely his massacre and torture of natives on Hispaniola, modern day Haiti and Dominican Republic, in the late 15th century.

READ MORE: Apologize for ‘mistakes’ of empire, Thornberry urges May ahead of Commonwealth summit

The video also covers the “British manufactured famine” which led to an estimated “at least 12 million deaths” in India. Monbiot states that Indians were driven into work camps, “where the inmates received the same rations as the inmates in [Nazi concentration camp] Buchenwald and where there was a 94 percent death rate per year.”

The journalist, known for his environmentalism, goes on to detail Britain’s more recent crimes of colonialism, focusing on the torture and internment in concentration camps of Kenya’s Kikuyu people. The Guardian writer details the gruesome torture methods, including castration, used by the British against Kenyans, adding that the papers documenting the crimes were burned.

In 2012, Mau Mau representatives, an anti-colonist military force predominantly made up of Kikuyu, sued the UK. The British government, in a rare legal victory for former subjects of the British Empire, accepted that prisoners had suffered “torture and ill-treatment at the hands of the colonial administration.”

Monbiot decries that the actoricities of colonialism have been “completely airbrushed from our national consciousness.”

The video comes amid fierce debate over Britain’s colonial legacy, with many talking up the benefits of the empire, while others, like Monbiot, are arguing that Britain needs to come to terms with its colonial era crimes.