Is an image of a crucified Jesus ‘shocking’? Facebook seemed to think so, and blocked an advertisement by a Franciscan university in the US that featured the image. The social media giant has since apologized for the “error.”

The Franciscan University of Steubenville, Ohio published 10 Facebook advertisements on Good Friday, ahead of Easter. The ads were promoting the Catholic school’s master’s degree programs in theology, catechetics and evangelization.

However, Facebook rejected the one that depicted the San Damiano Cross, hurting the school’s efforts to reach religiously-minded students on the Christian holy day. 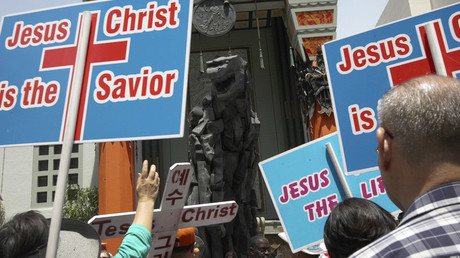 The San Damiano cross is particularly important to the Franciscan order. The legend goes that its founder, Saint Francis of Assisi, was praying before that particular crucifix when he heard the voice of God. The Franciscan University of Steubenville displays it prominently across its campus. The original hangs in the Basilica of St. Clare in Assisi, Italy.

“Your image, video thumbnail or video can’t contain shocking, sensational, or excessively violent content,” said the message from Facebook rejecting the ad, according to a blog post from the university.

“Facebook approved other ads with the exact same image, which again leads me to believe it wasn’t an algorithm, but was a low-level staffer who skims many, many ads and just had something personal against this one,” Crowe told Fox News.

Facebook apologized on Wednesday for what they said was an error.

“Our team processes millions of ads each week, and sometimes we make mistakes,” a Facebook spokesperson said. “This image does not violate our ad policies. We apologize for the error and have already let the advertiser know we approved their ad.”

The incident follows a string of controversies plaguing Facebook in recent weeks.  Last month it was revealed that data mining firm Cambridge Analytica had improperly acquired around 87 million Facebook users’ details which it used to target voters on behalf of President Donald Trump’s election campaign in 2016. The fallout from the scandal wiped $100 billion from Facebook’s stock market value.

The company is currently being investigated by the US Federal Trade Commission over its data practices. Last month, in an effort to assuage growing fears of inadequate privacy safeguards, Facebook also announced that it will no longer offer an advertising option which had used personal data provided by third-party collectors.