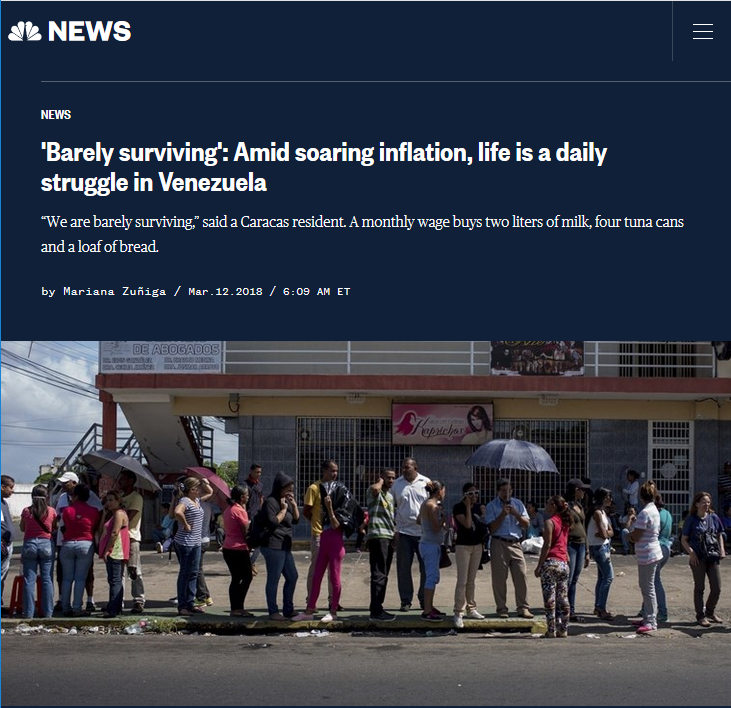 The United States has for years undermined the Venezuelan economy with economic sanctions, but US media coverage of Venezuela’s financial crisis has gone out of its way to obscure this.

The intent of the sanctions is clear: to inflict maximum pain on Venezuela so as to encourage the people of the country to overthrow the democratically elected government. SUNY professor Gabriel Hetland (The Nation, 8/17/16) pointed out in 2016 that the Obama government “prevented Venezuela from obtaining much-needed foreign financing and investment.” Such policies, Hetland notes,

have had a considerable and highly detrimental impact at a time when Venezuela is in desperate need of dollars but is prevented from gaining access to them by Washington.

In August 2017, two weeks before the Trump administration intensified the sanctions against Venezuela, UN Special Rapporteur Idriss Jazairy noted that they “would worsen the situation of the people of Venezuela” and that

sanctions are disruptive for any state, and can have a particularly devastating impact on the citizens of developing countries [such as Venezuela] when they impair the economy.

When Venezuelan President Nicolás Maduro in November 2017 proposed a meeting with creditors to discuss a restructuring of the country’s public debt, the Trump administration warned US bondholders that attending this meeting could put them in violation of US economic sanctions against Venezuela, which can be punished with 30 years in jail and as much as $10 million dollars in fines for businesses.

That same month, the US government added further sanctions that prevent Venezuela from doing what governments routinely do with much of their debt, which is “roll it over” by borrowing again when a bond matures. The sanctions also made it difficult if not impossible for Venezuela to undertake debt restructuring, a process wherein interest and principal payments are postponed and creditors receive new bonds, which the sanctions explicitly prohibit.

According to economist Mark Weisbrot (AlterNet, 11/3/17), the sanctions implemented that month appear designed “to prevent an economic recovery and worsen the shortages (which include essential medicines and food).” 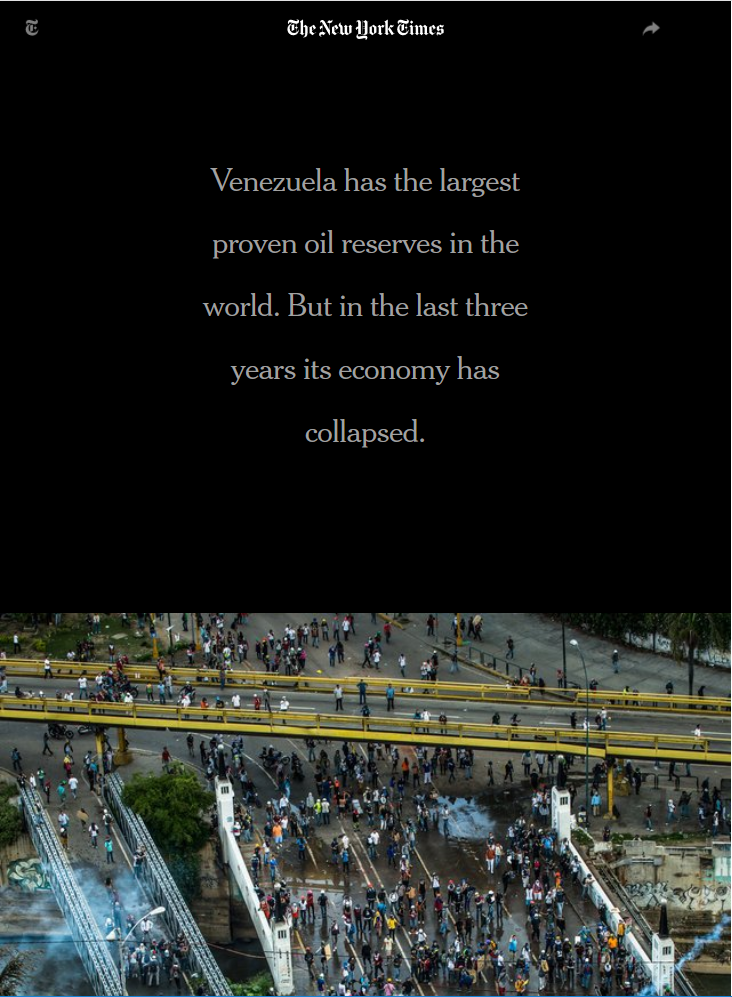 The word “sanctions” does not occur in this New York Times feature (12/17/17) on how Venezuela’s economic crisis is leading to child malnutrition.

All of this is rarely mentioned when US media report the hardships facing Venezuelans or describe the causes of Venezuela’s economic and political crisis.  A New York Times (12/17/17) story told readers that Venezuelan children are facing hunger, with hundreds dying from malnutrition, because “years of economic mismanagement set the stage for the current disaster”—according to “many economists.”

However, less than two weeks earlier, following a trip to Venezuela, UN Rapporteur Alfred de Zayas (ThinkProgress, 12/8/17) offered his analysis of what “set the stage for the current disaster.” He reportedly said that the conditions in the country did not constitute a full-blown humanitarian crisis, but that there are “shortages, scarcity and distribution delays, etc.,” and listed sanctions among the causes of these problems:

What is important is to get to know the causes and take measures against contraband, monopolies, hoarding, corruption, manipulation of the currency and the distortions in the economy caused by an economic and financial war which includes [the effects of international] sanctions.

The Washington Post’s editorial board (2/23/18), in writing about what it misdescribed as “Latin America’s Worst-Ever Refugee Crisis” (see FAIR.org, 2/18/18), overlooked these dimensions of what has happened in Venezuela, writing:

Though it controls the world’s largest oil reserves, the regime founded by Hugo Chávez has wrecked not just oil production but the economy as a whole.

At no point did the paper mention the US role in wrecking the Venezuelan “economy as a whole.” It’s a striking example of what Venezuelan economist Francisco Rodríguez  described in Foreign Policy (1/12/18):

[A] problematic idea driving current US policy is the belief that financial sanctions can hurt the Venezuelan government without causing serious harm to ordinary Venezuelans. That’s impossible when 95 percent of Venezuela’s export revenue comes from oil sold by the state-owned oil company. Cutting off the government’s access to dollars will leave the economy without the hard currency needed to pay for imports of food and medicine. Starving the Venezuelan economy of its foreign currency earnings risks turning the country’s current humanitarian crisis into a full-blown humanitarian catastrophe.

The reason is that the country lost access to international financial markets. Unable to roll over its debt, it was forced to build up huge external surpluses to continue servicing that debt in a desperate attempt to avoid a default. 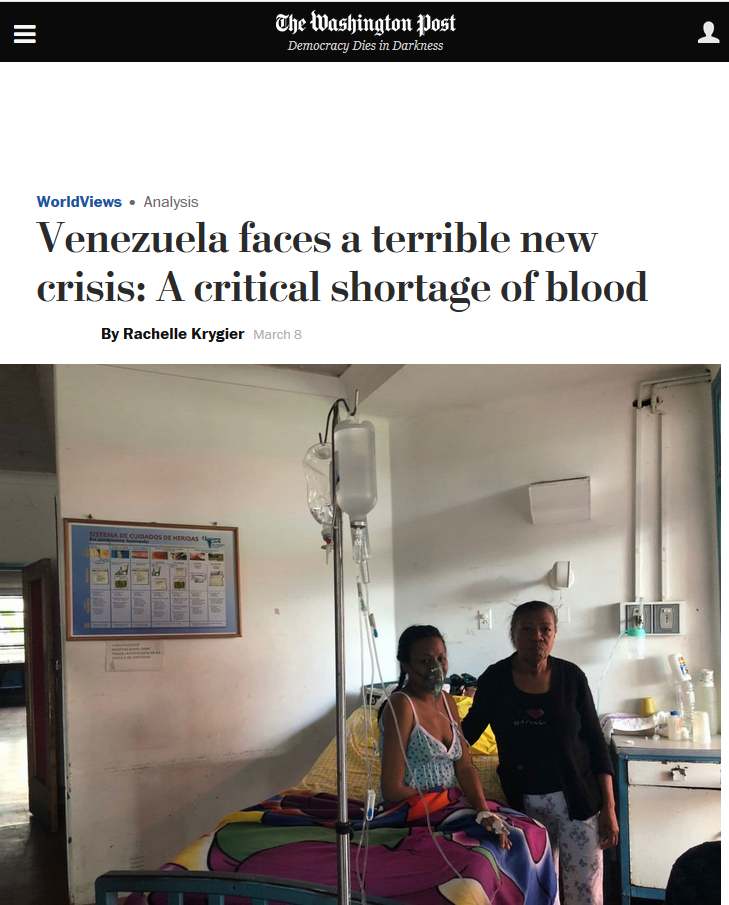 The Washington Post (3/8/18) blames “mismanagement and corruption,” not US efforts to destroy the Venezuelan economy, for the failings of the country’s health system.

Another Post article, by Rachelle Krygier (3/8/17), reporting on the serious challenges facing Venezuela’s health system, likewise ignored US sanctions as part of the explanation. Instead, she wrote:

Lower oil prices and populist policies championed by the late Hugo Chávez and continued by his successor, President Nicolás Maduro, have plunged Venezuela into a spiraling economic emergency.

The Post’s Anthony Faiola (3/2/18), writing about the “humanitarian crisis” driving Venezuelans to flee their country, similarly acquitted the empire of any wrongdoing:

Venezuela has reached a breaking point, with lower oil prices and economic mismanagement leading to the world’s highest inflation rate and spiraling indexes of poverty and malnutrition.

In an article on NBC’s website (3/12/18) on how “Life Is a Daily Struggle in Venezuela,” Mariana Zuñiga claimed that “Venezuela’s crisis can be traced back to Chávez,” who “relied heavily on oil revenues to fund his ‘21st Century Socialism’ agenda,” leaving Venezuelans with “little savings to fall back on” when oil prices collapsed. The other key reasons she listed for Venezuela’s problems were government currency controls and “years of excessive regulations [that] have discouraged local production.”

She neglected to point out what  150 scholars, writers, artists, activists and workers did in a letter published three days earlier (Alliance for Justice, 3/9/18): that the impact of US sanctions “falls most heavily on the poorest and most marginal sectors of society, to coerce political and economic change in a sister democracy.” They described sanctions as “a cynical use of coercive economic power to attack a nation that is already dealing with hyperinflation and shortages of basic commodities.” The letter also points to polls showing that a large majority of Venezuelans oppose sanctions, and notes:

It is no secret that Venezuela, unlike Mexico, Honduras, Colombia, Egypt or Saudi Arabia, is targeted for regime change by the US precisely because of Venezuela’s leadership in resisting US hegemony and the imposition of the neoliberal model in Latin America. And of course, Venezuela holds the largest oil reserves in the world, attracting more unwanted attention from Washington.

As the situation worsens in Venezuela, the US government has decided to aggravate matters further by repeatedly ramping up sanctions, most recently earlier this month, but media have failed to note the connection between such measures and the multitude of stories about Venezuelans’ struggles that they keep publishing.

These elisions exonerate the empire’s economic warfare against Venezuela and the harm the U.S has intentionally inflicted on the Venezuelan people. As de Zayas (Real News Network, 3/14/18) notes simply, the sanctions “have caused death.”

That these articles opt against informing their readers that American sanctions are contributing to the issues facing Venezuela is all the more egregious considering that the sanctions violate international law, contravening both UN Resolution 2625, which forbids “the use of economic, political or any other type of measures to coerce another state” and the charter of the Organization of American States, which bars the “use of coercive measures of an economic or political character.” As usual (e.g., FAIR.org, 9/19/13, 12/8/17), US media do not deem American violations of international law newsworthy.