Fret not, people of the over 80 countries where the US has interfered in elections – it was done in your “best interests,” according to former head of US Intelligence James Clapper.

Clapper, who famously lied about the NSA mass surveillance program before it was revealed by Edward Snowden, is back in the media spotlight, promoting his new book ‘Facts and Fears.’ 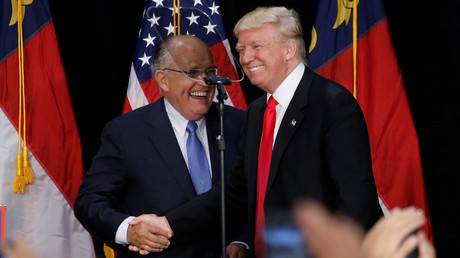 The tome promises readers ‘Hard truths from a life in intelligence.’ However, perhaps the more interesting insights are on Clapper’s reflections on the so-called Russiagate scandal and investigations into the alleged hacking of the US presidential election.

In an interview with Bloomberg’s Tobin Harshaw, Clapper is asked about the US’ own history of election interference. ‘I guess the way I think about that is that through our history, when we tried to manipulate or influence elections or even overturned governments, it was done with the best interests of the people in that country in mind,’ he answers, noting that “traditional reverence for human rights.”

US actions of overthrowing foreign powers has long been the subject of academic discussions and debate, with over 80 instances of it between 1946 and 2000 documented in Dov Levin’s report ‘When the Great Power Gets a Vote’ alone.

Clapper claims he’s not simply jumping on the book-writing bandwagon, but that the loss of what he calls the “beacon of truth” is what inspired him to put pen to paper.

He says US President Donald Trump is not the problem with America, he’s just a symbol of the wider issue, “where now it’s fashionable to have alternative facts or where ‘truth is relative,’ to quote Rudy Giuliani.”

Truth also seems to be a “relative” term for Clapper, who was caught out by Edward Snowden’s uncovering of a mass surveillance program at the NSA, something the former intelligence chief had denied to the US Select Committee on Intelligence.

The now-retired Clapper has some high hopes for his publication, saying he hopes it can in some way inform the public about the threats the US faces, “both internal and external.”

On the regrets front, there’s no surprise as to what he feels the biggest issue yet to be solved is, and that’s the “intractable problem” of Syria.

His comments come just days after President Bashar Assad told RT that Washington and its “puppets” tried, and failed, to destroy Syria – and the US military will eventually be forced out of the country.

READ MORE: US ‘losing its cards’ in Syria: Highlights of RT’s interview with Bashar Assad