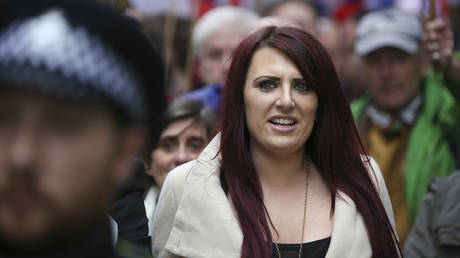 Jayda Fransen, the former deputy leader of ultranationalist right-wing Britain First group, was convicted of inciting hatred for a speech about Islam in Belfast in 2017, while leader Paul Golding was acquitted.

Fransen was also separately convicted for additional comments she made while filming at the peace wall in the city. District Judge George Conner said her speech at the ‘Northern Ireland Against Terrorism’ event was a “vehement attack against a religious group,” the BBC reports.


She told attendees that Muslims are “baying for our blood,” and that “Islam says every single one of you wonderful people here today deserves to be killed.” Fransen added that it was time to come together against “the one common enemy.”

“I’m satisfied these words were intended to stir up hatred and arouse fear,” Judge Conner said at the trial.


In December 2017, Fransen also claimed that the “Islamification” of Britain would see walls like the peace walls separating Catholic and Protestant neighborhoods in Belfast popping up around the UK. She said it was “descending into civil war” and that it was time to “rise up against the biggest threat against the entire world.”

Britain First leader Paul Golding, John Banks, and Paul Rimmer were acquitted on similar charges as the judge found that while “ugly,” their comments weren’t illegal.


All four defendants were accused of using threatening, abusive, or insulting words intended to stir up hatred or arouse fear. Their defense argued they were entitled to free expression.

Fransen was jailed for four months in March 2018 after being convicted of three counts of religiously aggravated harassment for distributing leaflets and posting videos during a gang-rape trial in England. She announced she was leaving Britain First in January for a new beginning, saying “something big” was coming.

She will be sentenced at Belfast Magistrates’ Court in May.