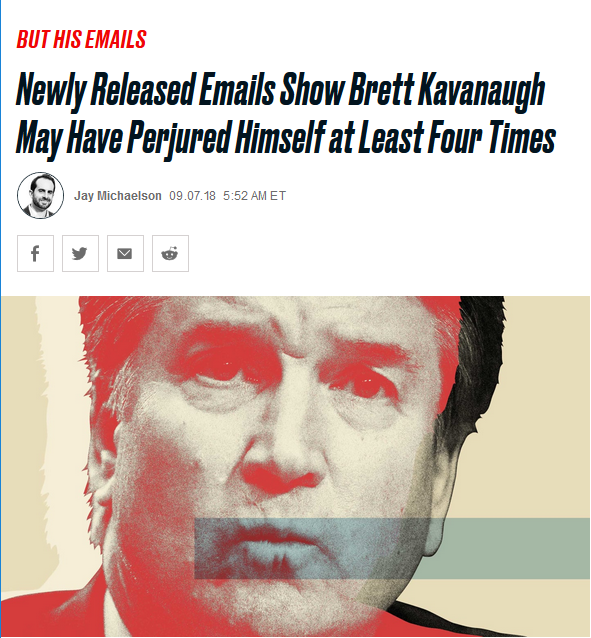 Trump Supreme Court Nominee Brett Kavanaugh was subject to a wringer of testy Senate confirmation hearings last week. The current DC Circuit Court judge has come under fire from Democrats on the Judiciary Committee for his stances against the landmark pro-abortion decision Roe v. Wade, affirmative action and programs for Native Hawaiians, as well as his support for torture.

But some Democrats have also said that Kavanaugh lied under oath in both current and past hearings, and groups like Free Speech for People, Demand Justice, MoveOn and NARAL Pro-Choice America have all advocated perjury probes against him. However, these serious allegations of perjury have received sparse coverage from establishment media outlets like the New York Times, Washington Post, CNN and NPR.

Democratic Sen. Patrick Leahy noted that while Kavanaugh was working in the Bush administration as White House staff secretary in 2004, he received thousands of stolen documents that were circulated by Manuel Miranda, a GOP Senate staffer, which revealed Democratic opposition strategies and questions to be asked of Bush judicial nominees. Leahy offered examples of his own stolen emails as proof. In Judiciary committee hearings in 2004 and 2006, Kavanaugh denied under oath that he knew the documents were stolen, even though one of the email chains he was copied on was titled “spying.”

In the 2004 hearing, Kavanaugh also denied under oath that he “personally handled” the nomination of controversial anti-abortion judge William Pryor to the DC Circuit Court, although emails from 2002 and 2003 say otherwise.

Sharpening these allegations is the fact that Kavanaugh himself has in the past supported strict interpretations of perjury. While working as an attorney for independent counsel Ken Starr in 1998, Kavanaugh urged that President Bill Clinton be impeached for perjury over his role in the Monica Lewinsky sex scandal. Kavanaugh authored a memo to the other Starr attorneys that pushed for a civil suit for perjury against Clinton, suggesting graphic questioning of Lewinsky as well. 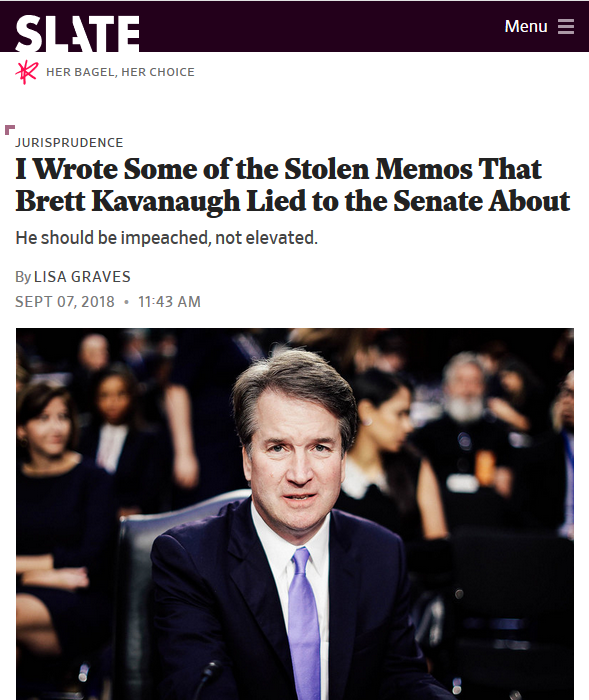 While the Times editorial board (9/7/18) came out against Kavanaugh’s confirmation, they have avoided fully addressing Kavanaugh’s potential perjury charges (although columnist Michelle Goldberg did highlight his lies under oath in an op-ed, and an article by Nicholas Fandos mentioned it in passing). This is odd, considering that the Times (8/20/18) recently looked back at Kavanaugh’s role in pushing for perjury charges in the Starr investigation and has covered the scandal regarding the stolen Democratic documents in the past (3/5/04).

On September 7, CNN analyst John Avalon dismissed the hacking allegations by Senator Leahy as “baggage” and “ancient history.” Two days later, Jake Tapper did attempt to address Kavanaugh’s allegations of perjury on CNN (9/9/18), but instead of reporting on the intricacies of the issue, he invited on Republican Sen. Ben Sasse, who obviously defended Kavanaugh.

The Washington Post (9/5/18, 9/7/18) reexamined the document theft scandal and the recently released memo on the matter by Kavanaugh, but not in the context of potential perjury charges. Otherwise, the paper has been silent on the issue. Likewise, the Post’s Aaron Blake (9/6/18) reviewed the issue of whether Kavanaugh lied about his involvement in the Pryor nomination, but without using the words “lie” or “perjury”—instead gently suggesting that the story may “require some explaining by Kavanaugh.”

As FAIR associate Sam Husseini pointed out, in a recent NPR interview (9/10/18) with Ken Starr, Morning Edition host Steve Inskeep declined to press the former independent counsel on Kavanaugh’s perjury allegations. Kavanaugh’s Supreme Court nomination wasn’t even brought up at all in the interview.

Whether the perjury allegations against Kavanaugh turn out to have legal basis or not, such accusations against a Supreme Court nominee deserve at least one article with a thorough examination of the issue in establishment media sources like the New York Times, Washington Post, CNN and NPR.  This is especially true when the nominee threatens to shift the ideological balance of the court for decades.