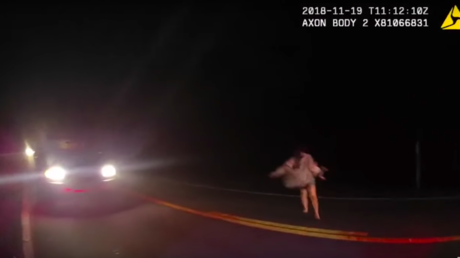 A Florida woman threw her baby on the side of a highway as she ran from sheriff deputies in a horrifying video.

After the woman dropped her baby she kept running.

The moment was captured on a sheriff deputy’s bodycam and makes for a disturbing watch.

The police officer is heard trying to convince the woman, obviously in panic, to stop. “Do not run in front of traffic, seriously,” she says to the mom, who keeps avoiding her. “You’re going to get (beep) tazed.”

Eventually, the deputy catches up with the mom, and the video ends.


Marion County Sheriff’s Office deputies were called to Florida’s Highway 315 and Highway 40 Monday after reports came in that a woman was walking through traffic with a baby in her arms.

Kayla Morgan has since been charged with aggravated child abuse and resisting arrest. She later admitted she had been high on methamphetamines and ‘Molly’ in the three days leading up to the incident. She told authorities she thought a monster was trying to suck her blood, WESH2 reports.

The baby suffered a skull fracture from the fall. It was taken to a local hospital for treatment.