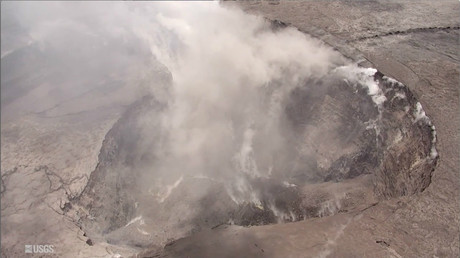 Amazing new drone footage of the mouth of Hawaii’s Kilauea volcano has revealed the extent of damage caused by explosive eruptions that have plagued residents of the Pacific island.

The video shows intense steaming around the Halemaumau Crater, a pit found within the much larger caldera at the summit of the volcano. Ominously, the crater also shows signs of collapse, meaning steep and overhanging walls have formed, along with new fault lines.

USGS researcher Kyle Anderson believes rubble trapped in the crater may be triggering larger explosions. “It is also possible that the vent could become permanently blocked, ending the explosions entirely,” he told Hawaii News Now.

According to experts at the US Geological Survey, explosions have expanded the crater by 10 times its original size in the last month. The pit is now thought to measure around 120 acres – that’s about the size of 90 American football fields.

The Kilauea volcano has destroyed more than 80 homes since it first erupted four weeks ago. The USGS estimates that the lava flow has covered an area equal to 5.5 square miles – around four times the size of New York’s Central Park.