Rear Admiral Douglas Fears has been named the new homeland security and counterterrorism adviser to the US president, filling the seat left vacant since his predecessor resigned shortly after John Bolton’s appointment.

Fears, who spent more than 30 years in the US Coast Guard, currently serves on the National Security Council staff as a special assistant to the president acting as a senior director for resilience policy. Just prior to that, he served as Chief of Staff for the US Coast Guard (2015-2017) where he managed more than 24,000 members of the force. A graduate in public administration of Harvard Kennedy School, Fears also has a degree from the US Naval War College. 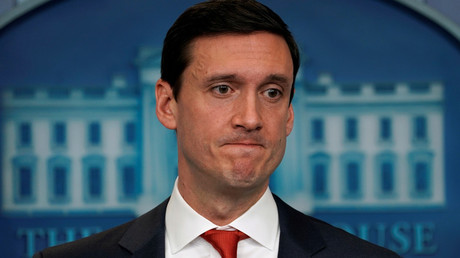 Bossert resigned from his role on April 10, a day after Bolton, a key member of Trump’s so-called ‘war cabinet’, assumed office. While officially leaving of his own accord, an administration official at the time of the resignation told Reuters that Bossert resigned at the request of Bolton who builds his own team.

Bossert’s resignation, coincidentally, came just days after his appearance on ABC’s ‘This Week’, during which he questioned the “timing” of an alleged chemical weapons attack in Douma, Syria. Days later the US, UK and France launched over 100 missile strikes against targets in Syria, in ‘retaliation’ to the alleged chemical attack, which they pinned on Damascus without due investigation.