The US Department of Justice has banned bump stocks – firearm modifications that simulate automatic fire – to the ire of pro-gun advocates. Guns fitted with bump stocks are now legally considered machineguns.

The amendment was signed on Tuesday by Acting Attorney General Matthew Whitaker. Bump stocks are described in the amended regulation as “devices that allow a semiautomatic firearm to shoot more than one shot with a single pull of a trigger” without any additional manipulation. The legal definition of “machinegun” has been changed to include bum stocks.


The new rule will take effect 90 days after it is published by the government, which is expected to happen later this week. This means that bump stock owners have about three months to hand over the devices to the closest office of the Bureau of Alcohol, Tobacco, Firearms and Explosives (ATF) or destroy them so they cannot be restored. It is estimated that up to 520,000 bump stocks have been bought by gun owners since 2010.

No form of compensation for owners is stipulated in the law.

The blanket ban on bump stocks did not come out of the blue, being as gun control activists have been demanding one for over a year now. Bump stocks were made notorious by the October 1, 2017, mass shooting in Las Vegas, the deadliest in US history to date. Gunman Stephen Paddock killed 58 people and injured hundreds more during open-air concert near the Mandalay Bay Resort and Casino. The shooter had 23 assault rifles, 14 of which were equipped with bump stocks.

It wasn’t until the next large mass shooting that Trump directed the Department of Justice to propose a rule change: in February 2018, a former student of a high school in Parkland, Florida, killed 17 students and staff – although his rifle didn’t have a bump stock, the rampage sparked up debate around gun control.

In a statement on Tuesday, the DOJ said it had “reviewed more than 186,000 public comments” regarding its initial proposal, and eventually decided to go with their original idea. 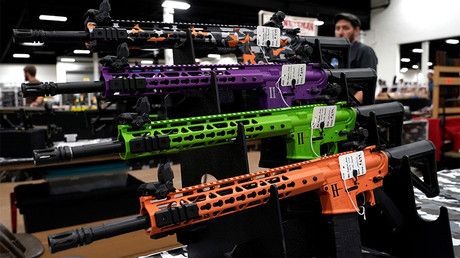 “We are faithfully following President Trump’s leadership by making clear that bump stocks, which turn semi-automatics into machine guns, are illegal, and we will continue to take illegal guns off of our streets,” Whitaker said in a statement.

The amendment contradicts the 2010 AFT ruling which did not designate bump stocks as machineguns. The ATF then said that the rapid-fire devices cannot be regulated unless new gun control legislation is passed by the lawmakers.

The announcement, although widely expected, has drawn outrage from gun-rights advocates, with several organizations vowing to take the government to court.

The Gun Owners of America, a gun rights organization and rival to the National Rifle Association (NRA), has slammed the ban, calling it “arbitrary.” Executive director Erich Pratt argued that the ATF and the DOJ have no right to change laws “under the guise of interpretation of a statute, especially where the law’s meaning is clear.” He added that his organization would file a lawsuit against both the agencies for “violating” federal law.

The NRA has also chastised the decision, calling it “disappointing.” The most powerful US gun rights organization said that the amendment “fails to address thousands of law-abiding Americans” who relied on previous ATF interpretations in purchasing bump stocks.