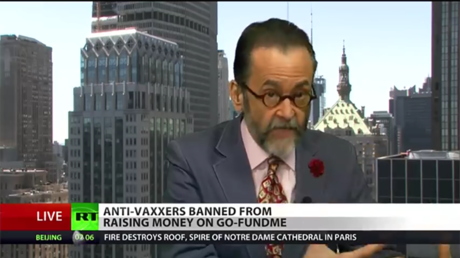 Crowdfunding platform GoFundMe’s decision to ban anti-vaxxers is discriminatory and hypocritical, media and legal analyst Lionel tells RT, even if the selective censorship by a non-governmental body is –strictly speaking– legal.

“Is this an opinion, and is this a discussion point that should be protected? And if so, by whom?” Lionel asks rhetorically, explaining that, while as a private company GoFundMe has a right to kick anti-vaxxers off its platform, if a competing fundraising site tried to ban a more socially-acceptable group – an LGBT activist organization, say, or a pro-choice campaign – “they’d be in the streets and screaming and yelling!”

It depends on whose ox is being gored.

“We understand that those are the rules. But why is it that we cannot discuss this?” he asks, interrogating the American Medical Association’s warning to tech companies that they have a “responsibility” to “curb anti-vax propaganda.” Why, he wonders, isn’t the doctors’ organization demanding a crackdown on vaping, or chocolate bars, or other heavily-promoted items that do much more damage to Americans’ health than failure to vaccinate?

Also on rt.com
‘I will never get over feeling I killed my son’: Anti-vaccination activists refuse to be ‘silenced’


Instead of the spirited debates of the past, then, “what we do is instead we say no! Stop talking! Time out!” It may be any of these platforms’ right to shut down unpopular points of view, Lionel says, but is it really worthy of the “land of the free and home of the brave?”