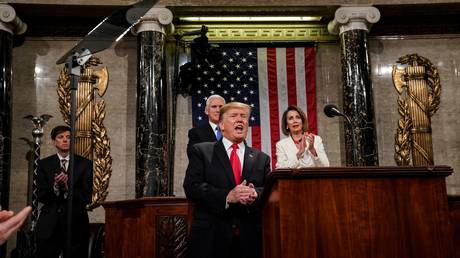 Was the State of the Union address a unifying pep talk, or mere partisan pandering? RT’s diverse panel of experts debated Donald Trump’s most contentious remarks about domestic and foreign policy – and of course, his border wall.

RT tapped more than 10 analysts from across the political spectrum to dissect Trump’s speech. On the domestic front, the panelists locked horns on Trump’s unwavering opposition to abortion. Conservative commentator Deanna Lorraine told RT that she was pleasantly surprised by the president’s decision to devote so much time to the polarizing issue.

Trump doubled-down on his pledge to build a wall along the border with Mexico – a vow that peeved liberal panelists. Former Georgia State Rep. Dee Dawkins-Haigler said that the Democrats aren’t against a secure border. The problem, she insisted, is that Trump is “putting all his focus on a wall. A wall that will do what? All the illegal drugs are mostly coming in from legal points of entry.”

Also on rt.com
‘Foolish wars, politics & ridiculous probes’: Only natural predators that threaten the US ‘miracle’?

Former Pentagon official Michael Maloof pointed out that, despite Trump’s claim that he was opposed to “foolish wars,” the president continues to “imply regime change” in places such as Venezuela and Iran.

Watch the full panel discussion below: