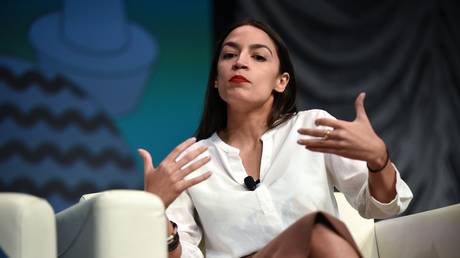 Inflammatory comments made by Democratic all-star Alexandria Ocasio-Cortez, in which she ridiculed the ‘garbage’ state of affairs in America and trashed Ronald Reagan, have ignited a fearsome battle of words on social media.

The rookie New York congresswoman expressed her frustration about what was happening in the United States during an appearance at the South By Southwest Conference & Festivals (SXSW) in Austin, Texas on Saturday.

“What’s really hard for people to sometimes see is that we are on this path of a slow erosion, and a slow slow slow just like — move away from what we’ve always been,” said Ocasio-Cortez. “You won’t even realize that you’ve drifted a hundred miles.”


Pushing back against critics who dismiss her Democratic Socialist policies as too radical, the 29-year-old congresswoman argued that the US has strayed from its “core values.”

“I think all of these things sound radical compared to where we are,” she concluded, “but where we are is not a good thing. And this idea of like, 10 percent better than garbage, it shouldn’t be what we settle for.”

Her comment was immediately seized upon by conservatives, who accused the left-leaning lawmaker of comparing the whole of America to trash.

In a country where neo-commies like her are elected into office, I might have to agree with her.

But more sympathetic voices on the platform rushed to Ocasio-Cortez’s defense, arguing that the “garbage” comment had been taken out of context.

“AOC made a comment about America being garbage. Typical conservative pundits are just highlitng only that without hearing out her explanation why she said that,” tweeted columnist David Weissman.

AOC made a comment about America being garbage. Typical conservative pundits are just highlitng only that without hearing out her explanation why she said that. If only I realize the propaganda tactics sooner than later.

Per @Emilylgoodin, who is there, @AOC said this in the context of talking about minorities and civil rights. i.e. she didn’t claim “America is ‘garbage’,” but she did say minorities are *treated* like garbage. That’s not exactly a fringe idea. https://t.co/zGFWbIh4nk