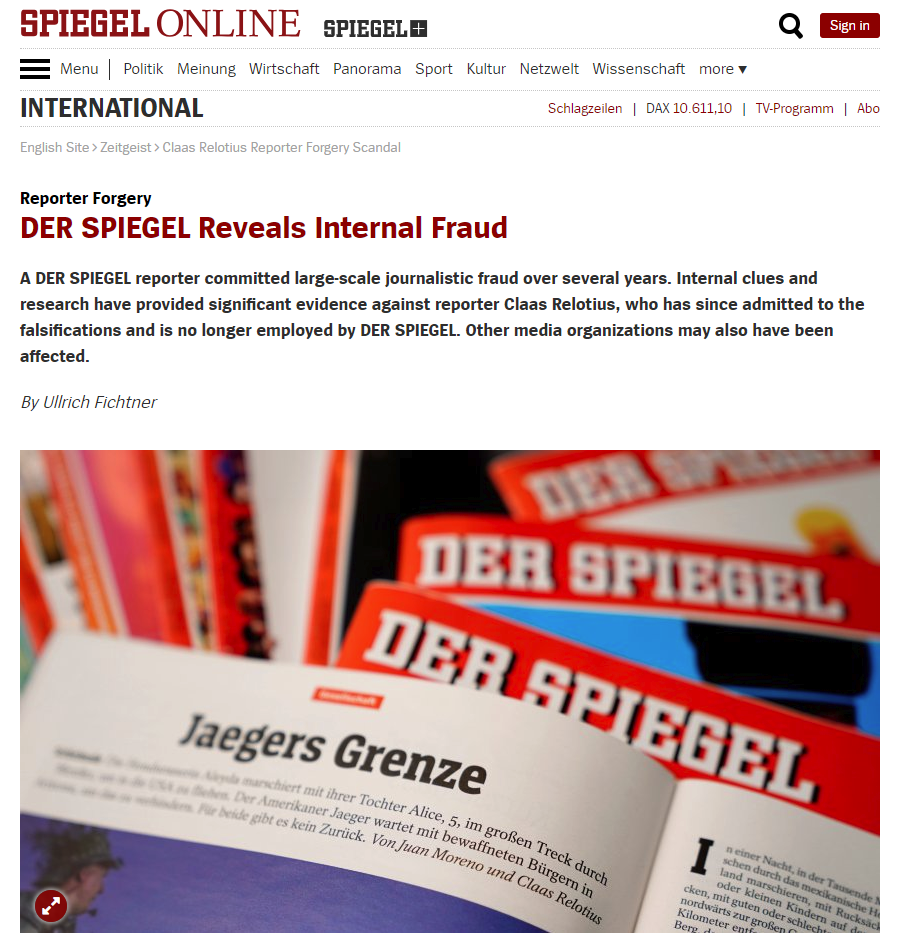 While everything about the story of Claas Relotius, the award-winning Der Spiegel journalist who turned out to have been faking everything from quotes to geographic details for years, should be alarming to anyone who cares about responsible journalism, possibly the most disturbing part comes near the end of the German magazine’s mea culpa about the affair:

As an editor and section head, your first reaction when receiving stories like this is to be pleased, not suspicious. You are more interested in evaluating the story based on criteria such as craftsmanship, dramaturgy and harmonious linguistic images than on whether it’s actually true.

Speaking as an editor and former section head, this is extremely dangerous thinking. Sure, editors are always on the lookout for arresting prose and dramatic narratives — those make for good stories, and stories are still how humans prefer to trade in and absorb information. But the job of editors when presented with a too-good-to-be-true story is to ask: Is this, in fact, too good to be true?

While Der Spiegel has defended its staff’s inability to notice Relotius’ fabrications on the grounds that they were too difficult to factcheck, many of them should have raised red flags right away. A Syrian war orphan forced to perform child labor who walks down the street singing an old song about war orphans forced to perform child labor? Someone should have at least queried the author to inquire what extraordinarily on-the-nose Syrian tune was involved. A sign at the edge of a small Minnesota town that reads “Welcome to Fergus Falls, home of damn good folks”? That’s unlikely enough to be worth a call to the Fergus Falls visitors’ bureau—or at least a quick scroll through Google Maps.

For the most part, though, fabricators like Relotius or Stephen Glass survive because they know how to craft prose that sounds like it could have been genuinely reported, even when it wasn’t. Full disclosure: I’m not immune, as I was once duped by a serial fabricator while editing for the Village Voice, who like Relotius turned out to have honed his craft over years.

But to say that editors (and even factcheckers) are fallible is one thing; to say that editors’ job is to look for good stories, not true stories, is another. That’s especially the case when you consider what kind of stories editors consider “good”: Those that reinforce existing stereotypes (a small Midwestern American town where even the Mexican immigrant restaurant owner is pro-Trump), those that relate unexpected man-bites-dog tales (a Guantánamo detainee so broken that he no longer wants to be released), those that tug at the heart strings (Iraqi children kidnapped by ISIS).

The job of journalists and editors alike is to tell stories, absolutely—but to tell them in service to the truth, even when it goes against preconceptions or conventional wisdom. (Hence the hoary old journalism maxim, “If your mother says she loves you, check it out.”) In using the defense that you can’t look a good story in the mouth, Der Spiegel is admitting that it was more interested in telling readers what it thought they wanted to hear than in telling them uncomfortable truths. That’s never a good attitude for a journalist, whether you’re dealing with a fabricating writer or a fabricating president.