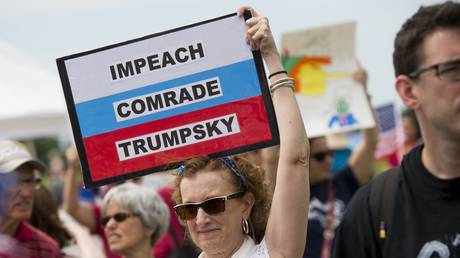 Progressive intellectual Noam Chomsky called the Democratic party’s focus on ‘Russiagate’ a ‘huge gift” for President Donald Trump that “could hand him the next election.”

Speaking to Democracy Now!’s Amy Goodman last week, Chomsky outlined his long-held view that there was never any ‘Russian collusion’ worth investigating in the first place.

“The Democrats are helping him,” Chomsky stated. “They are. Take the focus on Russiagate. What’s that all about? I mean, it was pretty obvious at the beginning that you’re not going to find anything very serious about Russian interference in elections.”

“The Democrats invested everything in this issue,” Chomsky continued. “Well, turned out there was nothing much there. They gave Trump a huge gift. In fact, they may have handed him the next election.”

In focusing on the specter of Russian collusion, Chomsky slammed Democrats for “being so unwilling to deal with fundamental issues.” Indeed, that same message has been seized upon by Republicans and the Trump administration as both parties gear up for next year’s presidential election.

With calls for impeachment rising from some Democrat lawmakers, and with several Democrat-led congressional investigations poised to examine Trump further, White House adviser Kellyanne Conway took a jab at the Russia-obsessed Democrats on Thursday. Holding up a blank sheet of paper, Conway told reporters “this is the success of the Democrats in the first 100 days in Congress.”

Chomsky, for his part, is a frequent critic of Trump, accusing the president of obscuring his pro-corporate policies of tax reform and deregulation with “outrageous” statements on abortion, gun rights, and other cultural issues to appeal to his base.

“Work for the rich and the powerful, shaft everybody else, but get their votes—that’s not an easy trick,” he told Goodman. “And he’s carrying it off.”

Chomsky, however, has also been a relentless critic of the left’s myopic focus on Russia.

“If there’s going to be collusion, I think we can guess what it is,” Chomsky said before the release of Mueller’s report last month. “Maybe he made some deal to have a Trump hotel put up in Moscow. Okay, that’s corrupt, but it’s the kind of corruption that unfortunately is all over the place.”

Finally: here’s Chomsky heaping contempt on the breathless fixation on Russiagate and Trump/Russia collusion. He focuses particularly on the claim that Russia controls Trump when the reality is that Trump has been dangerous belligerent toward Russia: https://t.co/qDzrc8yU3epic.twitter.com/CGsrIZm1Yy