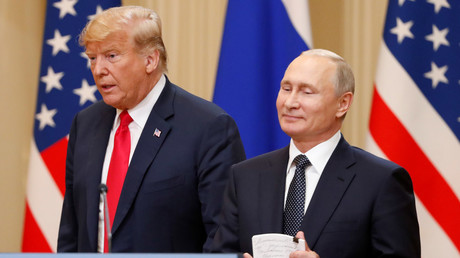 “Donald Trump’s press conference performance in Helsinki rises to & exceeds the threshold of ‘high crimes & misdemeanors.’ It was nothing short of treasonous. Not only were Trump’s comments imbecilic, he is wholly in the pocket of Putin. Republican Patriots: Where are you???” Brennan tweeted on Monday.

Shortly afterwards, Brennan appeared on MSNBC to demand that Trump officials resign in protest. Brennan has long been a vocal opponent of Trump, and has been one of the loudest voices supporting the unproven theory that the Trump campaign colluded with Russia in the run-up to the 2016 election.

Trump has accused Brennan of knowingly using a dossier of salacious and false allegations against him (Trump) to jump-start Special Counsel Robert Mueller’s ongoing and fruitless ‘Russiagate’ probe. Trump said that Brennan “disgraced himself…and the entire Intelligence Community” in doing so.

At the conference, Trump and Putin both emphatically denied accusations of collusion in the runup to the 2016 election, with Trump saying he “beat Hillary Clinton easily” without Russian help, and Putin calling the claims “nonsense” and challenging the press to show “a single fact that would prove” any collusion occurred.

Trump said that he “brought up” allegations of election-meddling with Putin, and said that Putin “may well want to address it,” but did not elaborate further on the subject.

Both leaders acknowledged that US-Russia relations were at a particularly low ebb, but pledged to work together on areas of shared interest, including the denuclearization of the Korean Peninsula and the eradication of radical Islamic terrorism.

Still, even Trump’s political allies called him out for not pressing Putin hard enough on alleged election meddling. Republican Senator Lindsey Graham (South Carolina) called the conference a “missed opportunity” that would “be seen by Russia as a sign of weakness and create far more problems than it solves.”

Missed opportunity by President Trump to firmly hold Russia accountable for 2016 meddling and deliver a strong warning regarding future elections.

This answer by President Trump will be seen by Russia as a sign of weakness and create far more problems than it solves. (1/3)

Graham then suggested that Trump have a commemorative World Cup soccer ball – a gift from Putin – checked for “listening devices.” Jeff Flake (Arizona), another Republican senator, called the conference “shameful”

I never thought I would see the day when our American President would stand on the stage with the Russian President and place blame on the United States for Russian aggression. This is shameful.

Former Republican National Committee Chairman Michael Steele turned up the Tom Clancy spook-talk, tweeting that President Trump looked like an “asset” standing next to his “handler” during the conference.

“My people came to me…they said they think it’s Russia. I have President Putin. He just said it’s not Russia. I will say this, I don’t see any reason why it would be.”
–Trump

That’s how a press conference sounds when an Asset stands next to his Handler.

House Speaker Paul Ryan (R-Wisconsin) and Senator Bob Corker (R-Tennessee) both unloaded on the President, perhaps unconstrained by the fact that neither are seeking reelection this November. Ryan said that Trump should not be so keen to make nice with Putin, and that he must appreciate that “Russia is not our ally,” while Corker said that Trump’s comments made America look like a “pushover” on the world stage.

Senator John McCain – who last year blasted Trump for having a phone call with the Russian president – stayed true to form and called Trump’s press conference “one of the most disgraceful performances by an American president in memory.” In his full statement, McCain said that “no prior president has ever abased himself more abjectly before a tyrant.”

For the president of the United States to side with President Putin against American law enforcement, American defense officials, and American intelligence agencies is thoughtless, dangerous, and weak. The president is putting himself over our country.

Once again, @realDonaldTrump takes to the international stage to embarrass America, undermine our institutions, weaken our alliances, & embrace a dictator. Russia interfered in our elections & attacked our democracy. Putin must be held accountable – not rewarded. Disgraceful.

To Adam Schiff (California), the top ranking Democrat on the House Intelligence Panel, Trump may as well have rolled out the red carpet and invited Putin in to meddle with the upcoming midterm elections.

President Trump just attacked our intelligence agencies and law enforcement for doing their jobs while standing next to a dictator who intervened in our election to help elect Trump.

Putin will take this as a green light to interfere in 2018, and it is. Cowardly and shameful.

House Minority Leader Nancy Pelosi (California) once again repeated the Democrat line that Putin must be dangling something over Trump’s head, saying that only blackmail could explain his “refusal to stand up to Putin.”

Every single day, I find myself asking: what do the Russians have on @realDonaldTrump personally, financially, & politically? The answer to that question is that only thing that explains his behavior & his refusal to stand up to Putin. #ABetterDeal

Democrat Senator Jeff Merkley (Oregon) brought up the possibility of blackmail in an interview with Buzzfeed news on Monday, suggesting that the ‘pee tape’ – a purported tape of President Trump hiring hookers to urinate on a bed in a Moscow hotel mentioned in the Steele dossier – is not just the stuff of Democrat fantasy, but actually real.

When asked whether Russia has any compromising information on Trump at Monday’s conference, Putin described such allegations as “utter nonsense.”

Amid the political bickering, Director of National Intelligence Dan Coats stepped in to clarify that the US Intelligence community stands by its assessment that Russia did meddle in the 2016 election and that it (Russia) continues with its “pervasive efforts to undermine our democracy.”

Not all reviews of Trump’s behavior at the summit were bad, however. Former US diplomat Jim Jatras saw the press conference as a “masterful” blow to the US political establishment.

At the conference, Trump addressed partisan criticism of him attending a meeting with Putin, but said that he “would rather take a political risk in pursuit of peace, than risk peace in pursuit of politics.”