A Democrat congressional staffer has been arrested and charged with publishing the personal information of three GOP senators. The arrest vindicates Rep. Maxine Waters, but may be bad news for her colleague Sheila Jackson Lee.

Jackson A. Cosko, 27, was named by the Capitol Police on Wednesday as the suspect behind the Wikipedia edits to pages of Senators Lindsey Graham (R-South Carolina), Orrin Hatch (R-Utah) and Mike Lee (R-Utah), publishing their home addresses and phone numbers.

The doxx happened during last Thursday’s contentious session of the Senate Judiciary Committee, which heard the testimonies of Supreme Court nominee Brett Kavanaugh and Dr. Christine Blasey-Ford, who accuses him of sexually assaulting her 36 years ago, when they were both in high school. 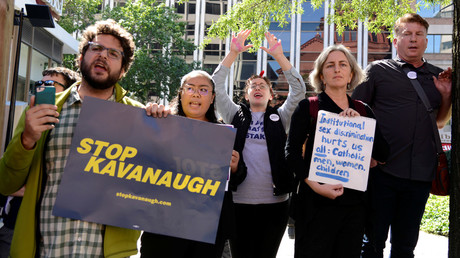 Initial suspicions fell on someone from the office of Rep. Maxine Waters (D-California), but she rejected all accusations. In a statement the following day, Waters said she was “utterly disgusted by the spread of the completely false, absurd, and dangerous lies and conspiracy theories that are being pedaled (sic) by ultra-right wing pundits, outlets and websites.”

Cosko’s arrest clears Waters, but may implicate several other Democrat lawmakers. According to the web service Legistorm, Cosko’s most recent employment was at the office of Sen. Maggie Hassan (D-New Hampshire). However, a letter from Rep. Sheila Jackson Lee (D-Texas) dated September 10 identifies Cosko as one of her House staffers.

Prior to that, Cosko interned for Senator Barbara Boxer (D-California), before she retired in 2016 and was succeeded by Kamala Harris – who currently sits on the Senate Judiciary Committee.

Lee was the congresswoman who was photographed handing an envelope to Dr. Ford’s lawyers during Thursday’s hearing, prompting a frenzy of speculation online. Her office later said those were “unopened stationery notes to counsel for Dr. Ford from women who wanted to enter the hearing room but were not allowed to.”

Cosko has been charged with making-public restricted personal information; witness-tampering; threats in interstate communications; unauthorized access of a government computer; identity theft; second-degree burglary and unlawful entry. The Capitol Police said “additional charges may be forthcoming” as the investigation continues.

The Burlingame, California native lives in Washington, DC and is studying cybersecurity at George Washington University, according to his social media profiles.