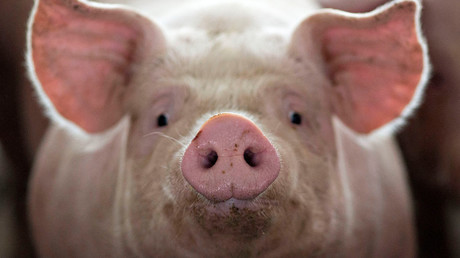 A scientist claims to have restored circulation to the brains of decapitated pigs in what is literally a death-defying feat – and a potential boon for those hopeful the human brain could one day be kept alive outside the body.

Yale University neuroscientist Nenad Sestan conducted experiments on up to 200 pig brains obtained from a slaughterhouse. He revealed the results of his research during an address to the National Institute of Health, saying he used a system of pumps, heaters and bags of artificial blood known as ‘BrainEX’ to restore circulation to the organs for up to 36 hours.

While there was no evidence that the pig brains regained consciousness, Sestan said that billions of individual cells were found to be capable of normal activity. The work is yet to be published but has been submitted for publication in a scholarly journal, he told reporters from Technology Review, the Massachusetts Institute of Technology magazine. He also said he had not planned on his comments being made public.

“That animal brain is not aware of anything, I am very confident of that,” Sestan told the NIH audience, according to the MIT report. RT has contacted Sestan for comment.

There is hope that the research could one day lead to brain transplants as a means to avoid death. According to Steve Hyman, director of psychiatric research at the Broad Institute in Cambridge, Massachusetts, such hopes would be mistaken. “It may come to the point that instead of people saying ‘Freeze my brain,’ they say ‘Hook me up and find me a body,’” Hyman told the MIT magazine.

The research does present some curious ethical questions, however, with some critics wondering if reanimating a brain outside the body, without ears, eyes, or a way of communicating, is an extreme form of sensory deprivation.