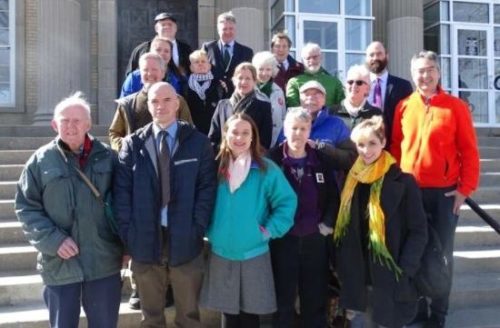 Massachusetts – On March 27, 13 defendants went into the West Roxbury District courthouse to answer charges related to their arrests protesting the West Roxbury Massachusetts Lateral Pipeline. They expected to have charges against them reduced to civil infractions — the equivalent of a parking ticket. While finding no grounds to deny that motion from the prosecution, the judge chose to let each defendant testify briefly on the necessity of their actions.

The defendants collectively presented a powerful and comprehensive argument for why it was necessary to engage in civil disobedience to stop the imminent local and global harms of this fracked gas pipeline. Following their testimony, the judge acquitted ALL the defendants by reason of necessity.

While defendants in this case were still denied a jury trial and the possibility of presenting a full necessity defense, this was the first time that we know of that defendants were acquitted based on climate necessity. The defendants told the story of the campaign against the West Roxbury Lateral Pipeline and how their actions were justified by the threat of climate change.

Lawyers for the 13 activists suggested there may even have been a “cause and effect” – that charges were reduced in order to avoid the trial for which the defendants, their legal team, eight expert witnesses, and many supporters had prepared.

Activists said they were disappointed that…