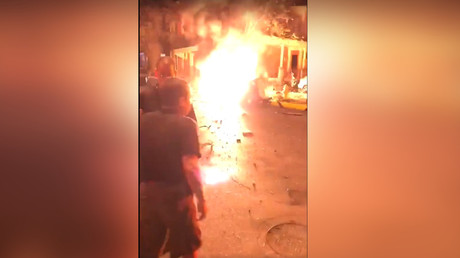 At least one person died after a car explosion struck a neighborhood in Allentown, Pennsylvania. Witnesses of the harrowing scene say the fire was “crazy” and that “streaks of blood” were seen around the explosion.

Debris from the car, which reportedly was split in half after the blast, was reportedly strewn around the whole block on Sunday. The explosion was felt far beyond the area and was heard throughout the town, local newspaper the Morning Call reported.

“The fire was crazy,” resident Carlos Perodin, who lives not far from the scene, told local media. Others revealed that they “saw body parts, streaks of blood around the explosion.”

Warning: The following video contains strong language, is extremely graphic and may disturb some viewers.

Allentown is a city of just over 100,000 people located a one-hour drive northwest from Philadelphia.

It’s not clear so far how or why the explosion happened. The FBI and Bureau of Alcohol, Tobacco, Firearms and Explosives (ATF) went to the scene to investigate the explosion. Officers from multiple police departments flocked to Allentown after the incident.