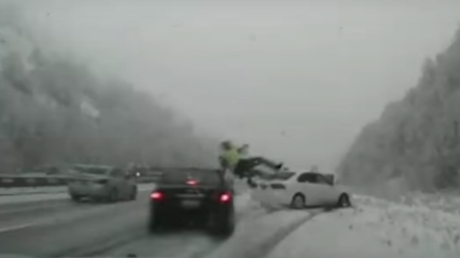 A dashboard camera caught a Utah Highway Patrol officer go airborne after he was struck from behind by a sliding vehicle on a snowy highway.

Sergeant Cade Brenchley was responding to multiple “slide-offs” in Sardine Canyon on Sunday, according to police, when he was struck by an out of control car that veered off the snow-covered highway.

The distressing footage shows Brenchley as he makes his way to help a vehicle that slid off the road, when an out-of-control second car strikes him from behind. The impact of the crash (at about 1:15 in the video below) sent the officer flying in the air before he came crashing down on the vehicle he was walking towards.

Brenchley was transported to Logan Regional Hospital, where he was treated for broken ribs and a broken scapula.

“It’s miraculous, though, that this is all I have, considering what we saw [on the video],” Brenchley said during a news conference at the hospital, where he is still recovering.

The Utah Department of Public Safety released the footage on Tuesday as a warning to drivers to “slow down and move over” when driving in treacherous weather. The driver of the vehicle, a college-aged woman, has apologized and visited Brenchley at the hospital, who said she’s “not to be vilified.”

“She did make a mistake, and I think she’s learned from it,” he said.