A federal appeals court has overturned FCC chair Ajit Pai‘s attempt to gut the subsidy that makes it possible for low-income communities to access broadband. For reasons known only to themselves, the FCC’s Republican majority voted last fall to make it much harder for people, including tribal residents, to obtain a subsidy provided by a program appropriately called Lifeline.

Lifeline helps people who qualify with a $9.25 monthly subsidy to buy phone and Internet service; for those living on tribal lands, the subsidy is $25 in recognition of additional hurdles to access they face. Nearly 11 million people subscribe, which still just represents 28 percent of eligible households. 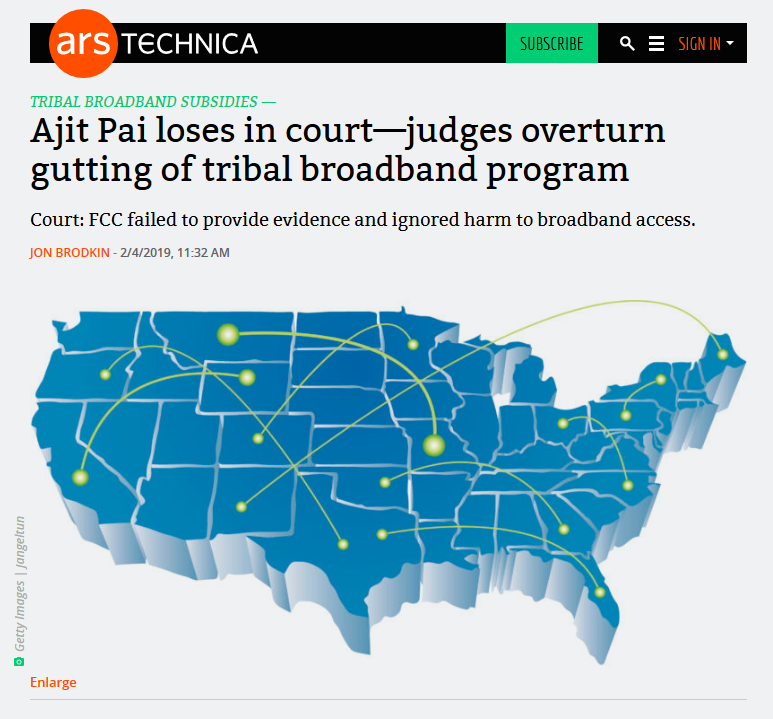 As Jon Brodkin at Ars Technica (2/4/19) reminds, the Lifeline program started as a landline phone subsidy under Reagan, then became a wireless subsidy program under George W. Bush, then a phone and Internet subsidy program under Obama. It is, in other words, not a controversial thing, but seen as a relatively cheap way to bridge an increasingly critical and unconscionable  divide—that is, until we get to Trump’s FCC and former Verizon lawyer Pai.

As part of their evident “public interest, what’s that?” philosophy, Pai and pals pushed through a change of policy to limit access to Lifeline last fall; they just didn’t bother to make a case.  The US Court of Appeals for the District of Columbia Circuit stayed the FCC decision pending appeal, and, as Brodkin reports, the same court followed that up early this month with a ruling that reversed the FCC decision and remanded the matter back to the commission for a new rule-making proceeding.

Among other should-be-embarrassing things, the judges wrote that the Commission’s decisions were “arbitrary and capricious,” without “a reasoned explanation… supported by record evidence.” And the agency

It’s almost as if they don’t have the public interest at heart.