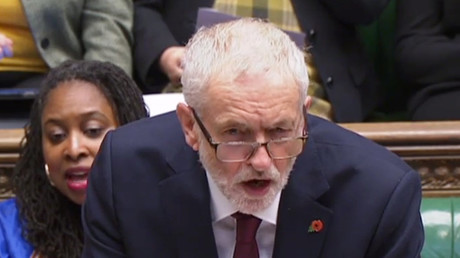 Opposition leader Jeremy Corbyn has decried the Brexit announcement made by Prime Minister Theresa May as a “bad deal which isn’t in the interests of the whole country.”

Criticizing the draft deal on Thursday, Corbyn argued that, “This is not the deal the country was promised,” adding that the British Parliament cannot afford to be backed into a corner and forced to choose between “a bad deal and no deal.”

READ MORE: MPs laugh at May as she addresses parliament after string of resignations over Brexit (WATCH LIVE)

As May’s government hemorrhages ministers in the wake of the announcement, and the Brexit ‘plan’ appears to be dead on arrival, Corbyn could well seize the opportunity to call for a snap election, which he believes would afford his Labour Party the opportunity to “re-open negotiations quickly.”

“It is clear the deal does not have the backing of the cabinet, the parliament or the country,” Corbyn told the House of Commons.

“The withdrawal agreement and the outline political declaration represent a huge and damaging failure,” he told May in the House of Commons after the prime minister set out her draft Brexit plan. “The government … is in chaos,” he added.

Braverman even suggested the proposed divorce deal risked the breakup of the United Kingdom itself.