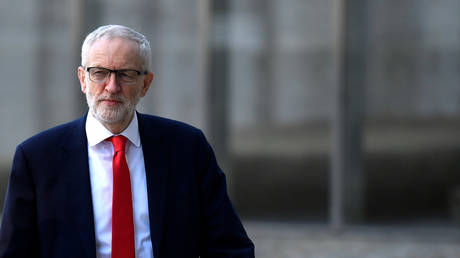 UK Labour leader Jeremy Corbyn has said he would be “very happy” to meet Prime Minister Theresa May after she suggested the two should sit down to agree on a new plan to ensure a no-deal Brexit is avoided.

Commenting shortly after May gave a speech at 10 Downing Street about the way forward for Brexit, Corbyn said he recognized that the PM had “made a move” and that he would meet with her.

BREAKING: Jeremy Corbyn says he is “very happy” to meet PM and won’t “set any limits” in negotiations. I understand Labour wants customs union and workers rights as minimum though.

“I recognise my responsibility to represent the people that supported Labour in the last election and the people who didn’t support Labour but nevertheless want certainty and security for their own future – and that’s the basis on which we will meet her and we will have those discussions,” Corbyn said.

In her speech, May said that if she and Corbyn could reach a unified position, it would be put to MPs for their approval before being taken to the European Council next week. If the two party leaders could not reach an agreement, other options would be put to the House of Commons for a vote.

It wasn’t all friendly gestures, however. Corbyn also said that Labour “reserved the right” to bring a motion of no-confidence in May’s government if it proves it is “incapable of commanding a majority in the House of Commons” – but “time will tell” on that front, he said.


The response to May’s speech has sparked some angry reaction in her own Conservative Party, with hardline Brexiteer MP Jacob Rees-Mogg lashing out at her plan to delay Brexit for a second time in order to work with Labour. Rees-Mogg said May’s move was “deeply unsatisfactory” and “not in the interests of the country.”

“You do find that leaders who decide to go with the opposition rather than their own party find that their party do not tamely follow,” he added.

Jacob Rees Mogg: “What was announced today was an attempt to overturn Brexit in an attempt to do a deal with the socialists. It’s very serious.”

Scotland’s First Minister Nicola Sturgeon was also unenthusiastic about May’s latest plan and her promise to make the Brexit delay time “as short as possible.” Sturgeon said this was a “potential trap” and that the sensible way forward would be for Britain to take part in upcoming European elections and then to seek a longer delay and allow for a public vote on whatever parliament agrees.

A spokesperson for May said the government was hoping to avoid taking part in European parliamentary elections, however.

This thread highlights a massive danger – if MPs allow 12 April to pass with no commitment to fight Euro elections, May 22 becomes the inescapable exit day…and PM would then be able to say it’s my deal or no deal. Parliament needs to be very wary about a potential trap. https://t.co/Z8D7gnbCtJ

“As it is, we now face the ridiculous possibility of being forced to contest the European elections more than three years after [voting to] leave the EU and having to agree to exit terms that in no way resemble what the people were promised when they voted to leave,” he said.