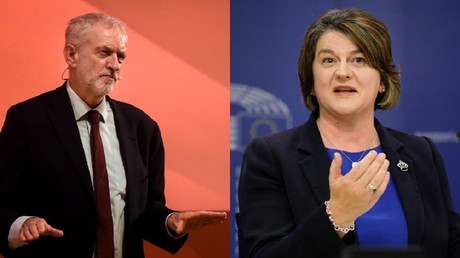 Jeremy Corbyn is allegedly plotting a no-confidence motion in parliament on Theresa May’s government before Christmas, as reports emerge of talks taking place between the DUP and Labour to find “common ground.”

According to the Huffington Post, a senior Labour source has said discussions are taking place with the Tories’ ‘confidence and supply’ partners, the DUP, as the opposition seeks to topple May before parliament breaks for Christmas next week.


They say “Discussions have taken place between Labour and the DUP to see if there is any common ground there,” and insist that unless the PM returns from Brussels with “major changes” to her Brexit deal, the “hostility will only increase.”

According to the unnamed source a “considerable number of Tory MPs” desperate to remove May, and could also back the opposition in a last-ditch attempt to get the party to install a new leader, the Huffington Post reports.

DUP chief whip Sir Jeffrey Donaldson has insisted he is “not aware of any such meetings.”

Labour believe they can get the DUP onside with the Northern Irish unionists declaring they will not back May’s Brexit deal without the contentious ‘backstop’ agreement being removed. If she comes back from the EU summit this week, in a last-ditch bid to save her deal without the necessary legal changes, the DUP could help Labour and other opposition parties seal her and her government’s fate.

The prime minister is scheduled to make a statement to parliament on Monday to update MPs on her Brexit negotiations, having delayed the meaningful vote on her deal, fearing defeat. It is after this statement when Labour could formally trigger a no-confidence vote.

“We might just have this coalition that will vote against her and we want to maximize the vote against her as much as we can. Just a handful of MPs can make a huge difference for us,” the Labour source claims.

The DUP has consistently stated it would not engage in any moves that may hasten the prospects of a Corbyn-led government, but removing their support for May could lead to a snap general election.

It comes as the PM secured a less than convincing majority in a confidence vote over her leadership of the party on Wednesday. 200 MPs backed May, while 117 voted against her.