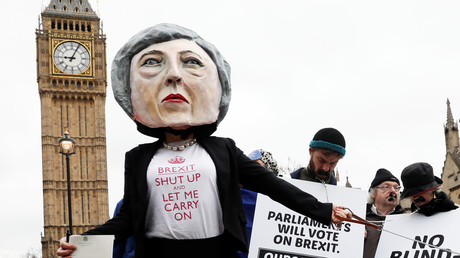 Labour leader Jeremy Corbyn mocked the Tories’ handling of Brexit during PMQs, likening it to their stewardship of the “shambolic privatized railways,” saying it’s had more delays and more cancellations than Northern Rail.

In a fiery PMQs dominated by Brexit, Corbyn focused on inflicting maximum damage on the Tories, who seemingly can’t agree a consensus on, particularly on the subject of a customs union and the border in Northern Ireland.

He used the ongoing Northern Rail saga that has seen a number of cancellations to highlight Brexit tensions in the cabinet.

Corbyn told the speaker of the house: “When it comes to Brexit, this government has delivered more delays and more cancellations than Northern Rail.”

“Its customs proposals have been cancelled and its own timetable, just like our shambolic privatized railways,” he added.

He finished one of his questions by casting doubt on Theresa May’s time in office: “Which will last longer, the Northern Rail franchise or her premiership?”

May hit back claiming that Labour “have tried to frustrate the Brexit process at every stage” and that “they are refusing to rule out a second referendum.”