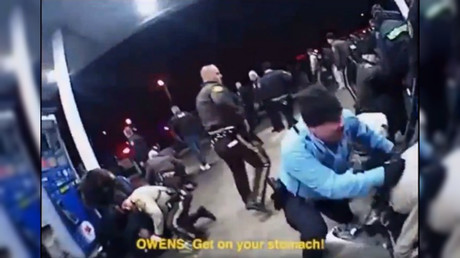 Missouri State Representative Bruce Franks Jr has released appalling bodycam footage he fought to obtain for four years, in which officers who arrested him brag openly about the brutality they used when dealing with protesters.

Franks alleges he was refused medical treatment despite reportedly suffering a concussion and a torn rotator cuff during his violent arrest.

“The release of the Antonio Martin protest footage is not to fuel tension between law enforcement and civilians, but to give insight into the experiences of communities who are disproportionately subjected to police brutality,” Franks wrote on Twitter.

The release of the 2014 Antonio Martin protest footage, is not to fuel tensions but to bridge gaps. This happened to me, but I’m not an anomaly. It took them a while to get us the body cam footage. It’s about transparency and accountability. pic.twitter.com/WM2OjlhuUy

He alleges police clubbed him with a baton, kicked him and maced him despite his compliance with their verbal commands. “I hope this level of transparency will highlight, the need for reform,” he added.

The lengthy footage from the police perspective of the Christmas Eve clash in 2014 shows St. Louis cops bragging about kicking, clubbing and macing people.

“I went through a whole can of mace,” Anderer tells another cop. “I had a couple of little good kicks.”

“One of the f**king white bi**hes caught me spraying everybody, so she’s on my ass. I’m hiding back here for a little bit,” Anderer is heard saying in the footage.

“This is a terrible place to fight people. Look at all these f**king lights and everything else.”

The incident occurred just four months after the shooting dead of Michael Brown in Ferguson, Missouri, just four miles away.

Franks was part of a protest group called the Peacekeepers, who went to de-escalate the situation. However, he was arrested when he tried to intervene in a fellow Peacekeeper’s arrest.

“We can confirm that some of our police officers were involved in the protest shown in the video from four years ago in December of 2014,” St. Louis County police said in a statement.

The protest turned violent, and subjects were taken into custody. Any use of force that occurred was documented and internal investigations were conducted as part of that review. We can not further comment on the actions taken by officers that night due to pending litigation.

Both Officer Steinmeyer and Officer Owens remain on the force.