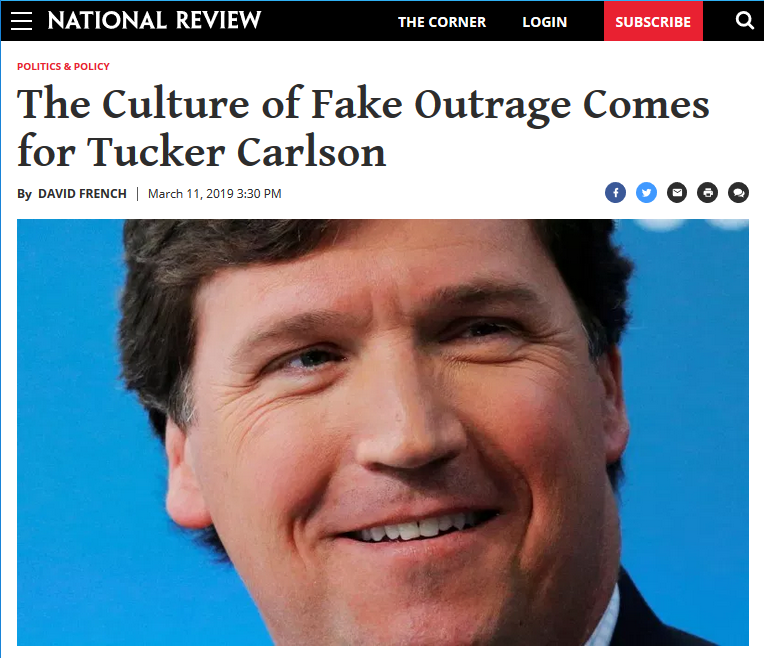 David French’s claim (National Review, 3/11/19) that no one was really offended by Tucker Carlson’s defense of raping 12-year-olds, or his calling Iraqis “primitive monkeys,” was described by New York Times columnist Bret Stephens as “astute as usual.”

A tweet (3/12/19) from New York Times columnist Bret Stephens approvingly quoted—calling it “astute as usual”—a statement from the National Review‘s David French (3/11/19): “Our nation cannot maintain its culture of free speech if we continue to reward those who seek to destroy careers rather than rebut ideas.”

Were French and Stephens defending Ilhan Omar? Julian Assange? Ha ha, of course not; they were speaking in support of Fox host Tucker Carlson, who is facing some pressure from advertisers after the group Media Matters released audio of him on shock radio from a few years back, saying things like Iraq is a “crappy place filled with a bunch of, you know, semiliterate primitive monkeys.”

For champions of civility like Stephens, the problem for public discourse is not this sort of statement, but any suggestion that the public could be better served. As Arizona activist Imraan Siddiqi put it in a response tweet to Stephens:

Ilhan quoted a Diddy lyric and you wrote 10 articles about it. Tucker called Iraqis monkeys—and those are “ideas,” to be “rebutted.”

The Timesman isn’t the only one engaged in Carlson rehabilitation. The Washington Post, having already gifted readers with a Kathleen Parker column (3/12/19) headed “Tucker Carlson, Don’t Bow to the Mob,” published a March 13 news report that explained, “In one set of recordings, Carlson made controversial statements about child rape and comments that could be construed as misogynistic.” Which was followed immediately by Carlson’s quote:

I reckon that could be construed as misogynistic, as could, just possibly, if one were inclined, Carlson’s comment that “I love women, but they’re extremely primitive, they’re basic, they’re not that hard to understand.” (The Post later edited the story to give it a different dodge, referring to “comments that some have called misogynistic.”)

As for his statements on child rape, they’re only “controversial” if one imagines a substantial block of folks that share his view that Warren Jeffs should be free. The former head of the breakaway Fundamentalist Church of Jesus Christ of Latter-Day Saints, Jeffs is serving a life sentence for assault and accomplice to rape for, for example, “arranging” a “marriage” between a 14-year-old girl and her 19-year-old cousin. Jeffs himself had a “wife” who was 12 years old, but that’s not really rape, Carlson explained: “The rapist, in this case, has made a lifelong commitment to love and take care of the person, so it is a little different.”  Jeffs, Carlson maintains, was only persecuted for being “unpopular,” with a “different lifestyle.”

Carlson says he won’t apologize for being “caught saying something naughty…more than a decade ago.” Media Matters is clear that the tapes are relevant to the views of a host who just a couple months ago was saying immigrants make the US “poorer and dirtier and more divided.” Says the group’s president Angelo Carusone, “We were actually helping people better understand just how vile your current Fox News show is by showing what that worldview really looks like.”