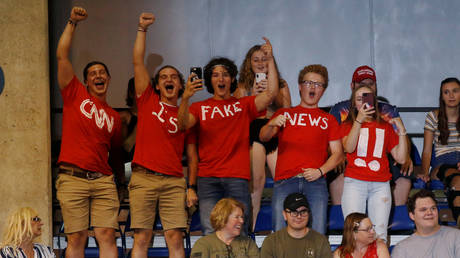 Netizens were up in arms this week grilling CNN boss Jeff Zucker who awkwardly defended his network’s coverage of the Mueller probe, saying their job was to report facts “as we know them,” rather than, you know, investigating.

“We are not investigators. We are journalists, and our role is to report the facts as we know them, which is exactly what we did,” Zucker said in light of the fact that the Robert Mueller investigation which CNN had harped on for the last two years found no evidence that Trump’s 2016 campaign colluded with Russia.

“A sitting president’s own Justice Department investigated his campaign for collusion with a hostile nation,” Zucker added in an apparent reference to Moscow. “That’s not enormous because the media says so. That’s enormous because it’s unprecedented,” he continued, seemingly moving back the network’s goalposts with any hope of an actual conviction smashed.

Also on rt.com
CNN roasted for warning US voters to stay off Twitter if they want to understand 2020 elections


Twitter users were relentless in commenting on Zucker’s remark, mocking the company’s lack of journalistic integrity along with their less than convincing excuse for it.

“Real” journalist investigate their facts before reporting them to the masses and not just report them because they sound factual or fit their narratives. How is Jeff Zucker President of @CNN?

Others were actually impressed with CNN: at least they had enough courage to admit they simply parrot information they are given without checking their facts… although it does seemingly undermine their claim to be the “most trusted name in news.”

It’s a truly stunning admission.
No digging, no source checking or fact finding, just spewing out talking points and the script scrolling in front of them compiled by their masters.
And who were they parroting? Brennan, Clapper, Comey etc
Literally (deep) state sponsored TV.

Wow. Good on CNN for just coming right out and admitting it.

This is what I have been saying, they basically just read press releases and tweets https://t.co/qhBgq1xALU

CNN chief correspondent Brian Stelter tried to contain some of the attacks, writing that “the meaning of the Zucker quote is obvious: He’s contrasting federal investigators, who were charged with investigating Russia’s 2016 attack, with journalists who were COVERING the federal investigation.”

His rescue effort was mostly in vain, however, as commenters began to dog-pile on him as well for defending the network’s ill-advised backpedaling effort.

.@CNN botched story after story with zero consequences and no shame. If you had an ounce of integrity you’d be calling for change. Like how about doing a better job on your sourcing standards? Or maybe not blindly accepting the word of intelligence officials as the word of God?

Also on rt.com
Mueller’s report, finding no Russia collusion or conspiracy, is a major indictment of US media


As a matter of fact, instead of taking the fall-out as a sign to make some changes, the network has seemingly decided to double-down on their accusations. They are now joining a cavalcade of #Resistance voices let down by the report in calling for it to be published in full, suggesting that the text could “still inflict significant political damage.”