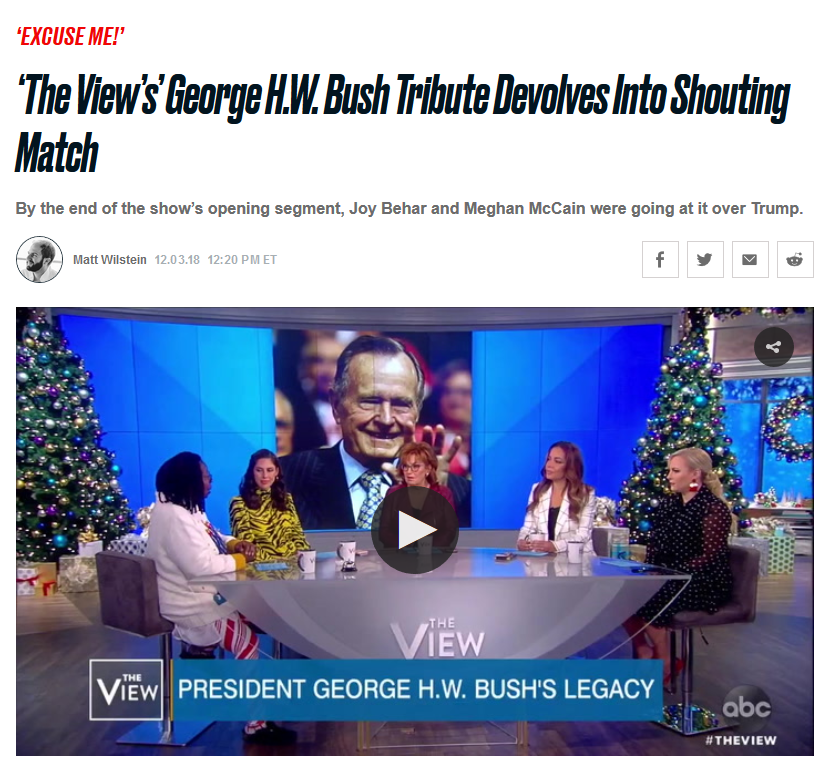 The Daily Beast (12/3/18) marveled that discussion of the death of a US president could devolve into a political disagreement.

If there was one thing it seemed most Americans could agree on this weekend, it was that former President George H.W. Bush was generally a good man who had the country’s best interest at heart. And yet, somehow, the hosts of The View still found a way to turn his tribute into an argument.

Thus sniffed the Daily Beast, which, like numerous other outlets that engaged in ingenuous whitewash of the former president, said more about itself than anyone else.

It isn’t merely that it’s no part of journalists’ job to stoke misty visions of powerful public figures, dead or living; asserting that George H.W. Bush was America’s lovable Grandpa—that only the insolent would gainsay such an image—erases the many people harmed grievously by his actions and inactions.

But those bombarded with corporate media accolades about how “responsible and reasonable” Bush Sr. was (according to the Washington Post—12/1/18); how he, in USA Today‘s words (12/1/18), “personified a time when….careful international diplomacy was not scorned as a sign of weakness”; how as the Chicago Tribune (12/1/18) had it, we were all touched by his “modesty, seriousness and gentlemanly grace,” could find their antidotes—not mean-spirited, just clear-eyed. 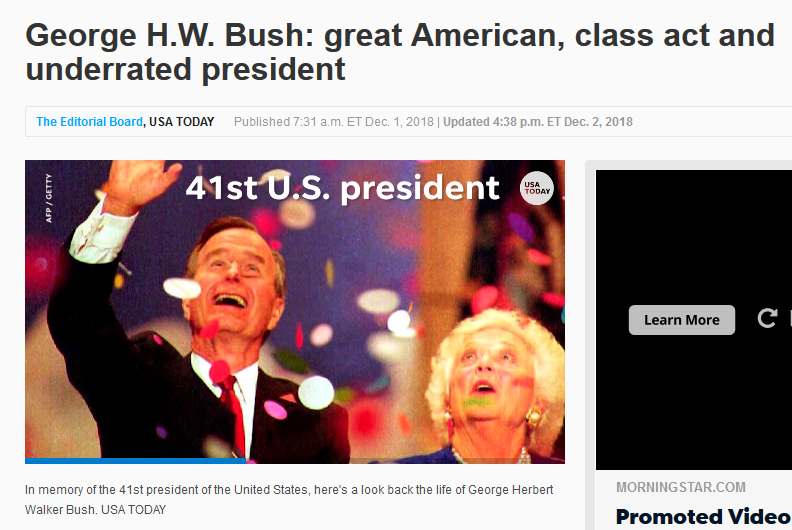 USA Today‘s two-minute video “look back [at] the life of George Herbert Walker Bush”  (12/1/18) devoted all of six seconds to his presidency.

Richard Prince at Journal-isms (12/1/18) reminded of the Clarence Thomas appointment, as well as Bush’s stage-managed TV set up of a DC teenager as the face of the “crack epidemic”;  Steven Thrasher at The Nation (12/1/18) wrote about the “disgrace” of celebrating Bush on World Aids Day, reminding of how he chided those dealing with the disease to just “change your behavior!”; and The Nation‘s Greg Grandin (12/4/18) reminded us of Bush’s wars in Panama and the Persian Gulf—remarkable for their “gratuitous killing.” Author Nora Eisenberg (12/5/18) elaborated at AlterNet on the myth of the “good” Gulf War, and how Bush “disinformed congress and the public to drum up support” for it.

And before you get nostalgic for media coverage that never was, look through FAIR.org; you’ll find things like Robert MacNeil of the MacNeil/Lehrer NewsHour (Extra!, 3/93) demanding of a guest who insisted on talking about the Iran/Contra scandal, in which Vice President George Bush’s office helped funnel covert weapons to Nicaraguan terrorists after Congress made such support illegal:

Why does this issue remain important? Clearly, the public is bored with it. The polls all show that years ago they stopped being interested in it. Why not, as Mr. Bush describes in his pardon statement, why not bring in the healing power of the pardon and sweep it away and sweep the bitterness away?

Of course, Bush Sr. did some important, positive things—the Americans with Disabilities Act leaps to mind—but media who insist on “sweeping away” everything else, who reduce to a footnote all those he harmed, are revealing their own view of what and who matters…which may not be history’s, and need not be our own.