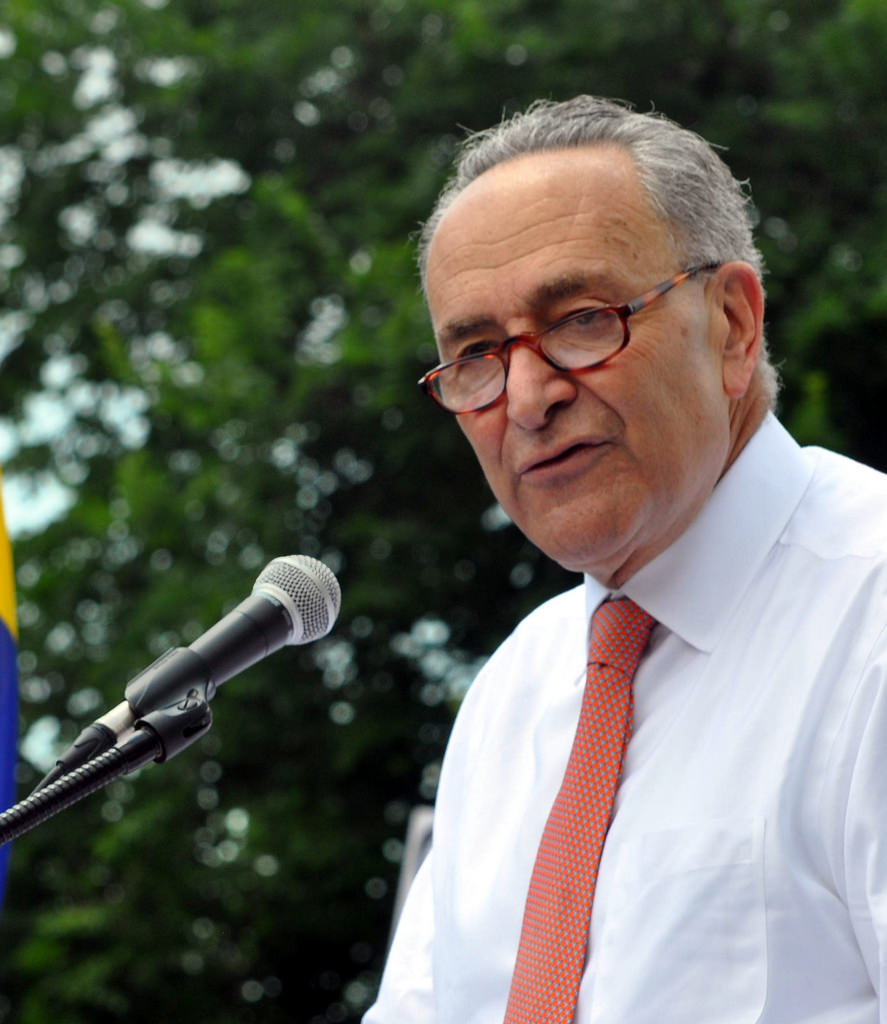 In the recent flare-up over “civility,” the leading Democrat in the Senate attacked Rep. Maxine Waters’ call for public confrontation with Trump administration officials as “not American.” Many activists in Brooklyn, Chuck Schumer’s home, were upset by the McCarthyite smear. Yet while the right-wing New York Post praised his stance towards Waters (6/26/18), New York’s senior senator faced little criticism in the local press for it.

For such a powerful figure, Schumer gets relatively scant scrutiny from New York City’s press corps, long considered the toughest in the United States. Instead, the tabloids dutifully cover the Senate minority leader’s Sunday news conference warnings about the latest consumer “outrage,” whether it be hurricane-damaged used cars flooding the market or sunscreen pills that surprisingly don’t work.

In the heyday of the tabloid wars of the late 20th century, many NYC politicians feared the wrath of influential columnists like Jimmy Breslin, Jack Newfield and Pete Hamill. But today’s leading columnists seem willing to give Schumer a free pass.

Errol Louis makes infrequent mention of Schumer in his Daily News column, and on his nightly show about city and state politics (NY1’s Inside City Hall), Louis hosted a roundtable discussion (2/16/17) with Schumer’s former press aides, in which they touted the virtues of Sunday news conferences. In his Sunday column in the Daily News, Harry Siegel regularly pillories Mayor Bill de Blasio, but rarely if ever places Schumer’s actions under the microscope.

Meanwhile, at the time of the 2016 election, New York Times columnist Jim Dwyer (11/8/16) went so far as to compare Schumer—then the prospective heir to Senate Democratic leader Harry Reid—to LBJ, the legendary “Master of the Senate.” Since taking office, Schumer has been more akin to the ineffectual Reid—unable to keep his ranks in unison over the Pompeo or Haskel nominations, or the rollback of Dodd/Frank. But Dwyer has not followed up on his over-optimistic prediction. 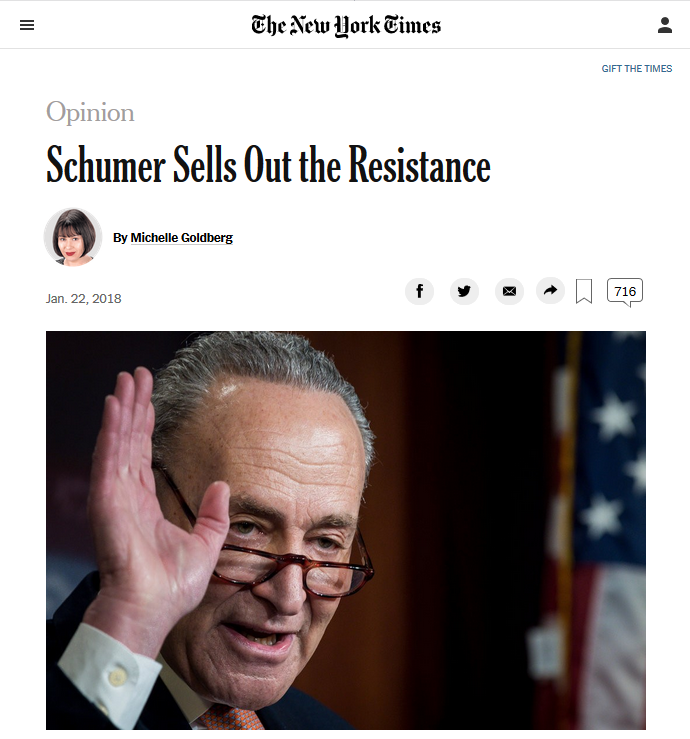 Michelle Goldberg (New York Times, 1/22/18) was one of the few New York columnists to criticize Schumer–as well as one of the only pundits to reject the Democrats’ cave-in on the Dreamers (FAIR.org, 2/2/18).

Occasional criticism of New York’s most powerful politician can be found in the Times’ op-ed pages. “It’s hard to overstate how disgusted many progressive leaders are,” observed Michelle Goldberg (1/22/18) regarding Schumer’s willingness to drop DACA protections in the fight over a government shutdown this past winter. Four years ago, Paul Krugman (12/5/14) was angry that Schumer viewed Obamacare as a mistaken priority for the Dems. More recently, Nicholas Kristof (6/16/18) chided the senior New York senator for his hostility to Trump’s negotiations with North Korea. But in general, the columnists in the leading media ally of the Democratic Party seem to overlook the actions of the hometown pol.

The city’s editorial boards have only intermittently picked up the slack. When the Obama administration pushed the Iran deal in the summer of 2015, Times editorial board member Carol Giacomo (Taking Note, 7/20/15) kept a close eye on Schumer’s position. When Schumer announced his opposition, Giacomo (Taking Note, 8/7/15) called it “wrong-headed and irresponsible,” arguing that it placed the aspiring Senate leader in accord with Israeli Prime Minister Benjamin Netanyahu but not Obama. When Trump shredded the deal this past May, Schumer claimed he was for it—but the Times said nothing about the latter’s dubious stance, which the president happily ridiculed.

The Daily News editorial board is unequivocally pro-Israel, as evidenced by its enthusiasm for Trump’s recognition of Jerusalem as its capital. Last October, two months before the administration announced its position, Schumer urged Trump to overcome his “indecisiveness” regarding what the senator viewed as the appropriate relocation of the US embassy to Jerusalem. But in its two editorials (12/6/17, 5/14/18) championing the administration’s embrace of that move, the Daily News made no mention of Schumer’s pivotal role. Nor has any editorial board criticized his position in the wake of the 60 Palestinians killed (and over 2,750 wounded) by Israel as the embassy’s change of address was celebrated.

There’s little evidence that the Dems have mounted effective opposition to the Trump administration, yet the Times nonetheless managed to place Schumer at the forefront of the “Resistance.” In late March, the editorial board (3/27/18) found “the Democratic leadership in full resistance mode” as Schumer was able to kill some egregious riders to an omnibus spending bill that prevented a government shutdown. As part of the same negotiations, Schumer was able to maintain funding for the Gateway Tunnel project that will make necessary improvements in transportation between New Jersey and New York. But that deal came at the expense of protection for Dreamers. Once again, Schumer’s maneuverings didn’t get full scrutiny in the NYC press.

One of Chuck’s signature moves is to make a “reasonable”-sounding plea that is destined to be unheard. Amid the uproar over the Trump administration’s family separation policy, the senator called for the president to appoint an “immigration czar” to coordinate the various federal government agencies involved in the issue. In the wake of the most recent Mueller indictments, Schumer first called for Trump to cancel his Helsinki meeting with Putin; when it became clear that the meeting would proceed, Schumer then advised the president, “Ask [Putin] to hand over the indicted Russians.” Such empty posturing by the nation’s top Democrat seems to escape the critical eye of his hometown media.

Given that Schumer will be at the forefront of the Democrats’ effort to stop Brett Kavanaugh from becoming the next Supreme Court justice, his ineffectual role in pushing the Obama administration’s doomed selection of Merrick Garland also deserves attention. Schumer was confident that his Republican colleagues would support the moderate judge, because Garland was not an “ideologue” and would just “follow the law.” To drive home the point, Schumer recently recommended that Trump nominate Garland.

Schumer’s advocacy for Garland famously went nowhere. Whether he can successfully mobilize the Resistance against Kavanaugh remains to be seen. Why he gets treated with kid gloves by the NYC press continues to be a mystery.

Theodore Hamm is chair of journalism and new media studies at St. Joseph’s College in Brooklyn. He is the editor of Frederick Douglass in Brooklyn.