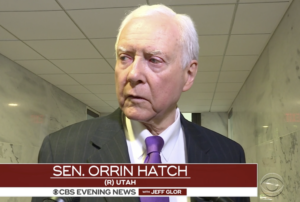 CBS Evening News (6/19/18) interviewed Republican Senator Orrin Hatch as one of its many government sources.

The Trump administration in April began enforcing a “zero-tolerance” immigration policy that has resulted in thousands of immigrant children being separated from their families. On June 18, ProPublica released an audio recording from inside a Border Patrol detention facility; children separated from parents and family members could be heard crying in the background, while a six-year-old girl from El Salvador begged for someone to let her call her aunt. The recording reminded the public of the undeniable reality that immigration policy has deep and lasting effects on actual people.

However, as corporate media dove into this story, the voices of those impacted most by immigration policy were drowned out by soundbites from congressmembers and Trump administration officials. Concentrated coverage of the policy from six major broadcast and cable news networks began on June 14; the story reached a climax of sorts on June 20, when Trump signed an executive order ending the policy. FAIR looked at the sources used on these networks during this seven-day period, examining the immigration-related segments on a representative evening news show from each network,* to see who got to speak about this contentious issue. 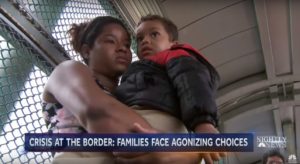 In a brief but engaging interview, NBC Nightly News (6/19/18) spoke with a mother and her three-year-old son who fled from Honduras to the US border to escape gang violence.

In the stories on these 42 episodes, these networks aired the words of 248 sources. Immigrant voices were strikingly lacking from the coverage; only 15 sources, 6 percent of the total, were current immigrants, whether children or adults; another 2 percent could be identified as past immigrants. Those who work with and for immigrants were also missing from many programs; 13 immigration rights advocates were cited, amounting to 5 percent of total sources.

Meanwhile, 62 percent of all sources were from the federal government; 47 percent of all sources were Republican officials, mainly representatives of the Trump administration or congressional Republicans. Twenty-one percent of total sources were Democratic officials, mostly members of Congress. While quoting executive and legislative representatives is a crucial part of holding officials accountable, the overwhelming emphasis on these sources tended to crowd out the voices of the people most directly affected by the policy, who could convey to viewers what child separation actually did to the families involved. 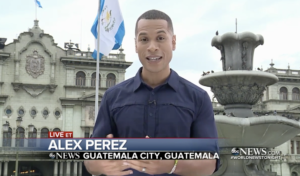 ABC World News Tonight (6/20/18) briefly touched on the circumstances in countries such as Guatemala that are forcing people to flee to the United States.

Overwhelmingly, the sources on these programs were used to offer an opinion on the policy of family separation, rather than to provide information or context. ABC (6/19/18) quoted Senate Majority Leader Mitch McConnell: “I support, and all of the members of the Republican conference support, a plan that keeps families together while their immigration status is determined.”

Both Democrats and Republicans called for family separations to end, but did not comment on what the future will look like for detained immigrants. Few sources spoke to how the policy was affecting immigrant families or how difficult the process of reuniting families would be.

Within the major broadcast network programs—ABC World News Tonight, CBS Evening News and NBC Nightly News—immigrant voices made up 12 percent of sources. Throughout the week, these three programs mostly aired the back-and-forth between Congress and the Trump administration. On these broadcast programs, Trump administration officials made up 39 percent of sources, while members of Congress made up 26 percent of the sources. Of the total sources on these programs, 16 percent were Democratic officials and 50 percent were Republican officials. As Trump administration officials gave conflicting defenses or reasonings behind the policy, Republican sources distanced themselves  and congressional Democrats criticized both Trump and GOP colleagues.

ABC used parts of the recording obtained by ProPublica three separate times, and spoke with a deported father whose son remains in the United States. CBS aired three immigrant voices, two adults and one child, all of whom were fleeing violence or instability in their home countries. NBC quoted a US senator who was a past immigrant (Hawaii’s Mazie Hirono) and four immigrant mothers—three of whom were separated from their children at the US border—as well as airing the ProPublica recording. 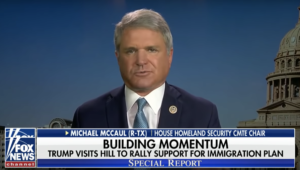 The comparable cable news programs—Fox News’ Special Report, CNN’s Situation Room and MSNBC’s Beat and Sunday-only PoliticsNation—showed even less diversity in their sources over the same seven-day period. Special Report aired no immigrant voices, instead focusing on government and “expert” sources, including other journalists. CNN used immigrant sources three times, and MSNBC quoted one current immigrant and three past immigrants. Meanwhile, the Trump administration and members of Congress constituted 73 percent of sources on the CNN show, 67 percent on Fox and 56 percent on MSNBC. Twenty-four percent of the sources on these programs were Democratic officials and 43 percent were Republican officials.

The few immigrants and civil rights advocates who were cited often expressed the crucial point that those coming into the United States are generally trying to escape imminent violence or political instability. In one of the few interviews with an immigrant, NBC’s Gabe Gutierrez translated a Honduran mother’s words:

Neither the Trump administration or members of Congress touched on this fact when discussing immigration policy. The immigrants who identified their home countries were from El Salvador, Guatemala or Honduras, all of which are still reeling from violence and political instability that the United States helped create—from the “gunboat diplomacy” of the early 20th century, through support for death squad governments in the 1980s to support for a coup regime in Honduras as recently as 2009. Glossing over this historical context gave an incomplete picture of the current situation, and allowed Washington officials to evade responsibility for the influx of immigrants from Central America.

Corporate TV news programs amplified the voices of the federal government while neglecting to show the lives and tell the stories of those affected by federal policy. The programs framed the story as whether or not families who try to cross the US/Mexico border should be separated, rather than exploring the causes and consequences of the current situation. In their coverage, the lived experiences of these immigrants are reduced to leverage for US politicians.

* Unlike the other programs examined, MSNBC’s The Beat only runs six days a week, so FAIR also looked at sources on PoliticsNation, which appears on Sunday in the same time slot.