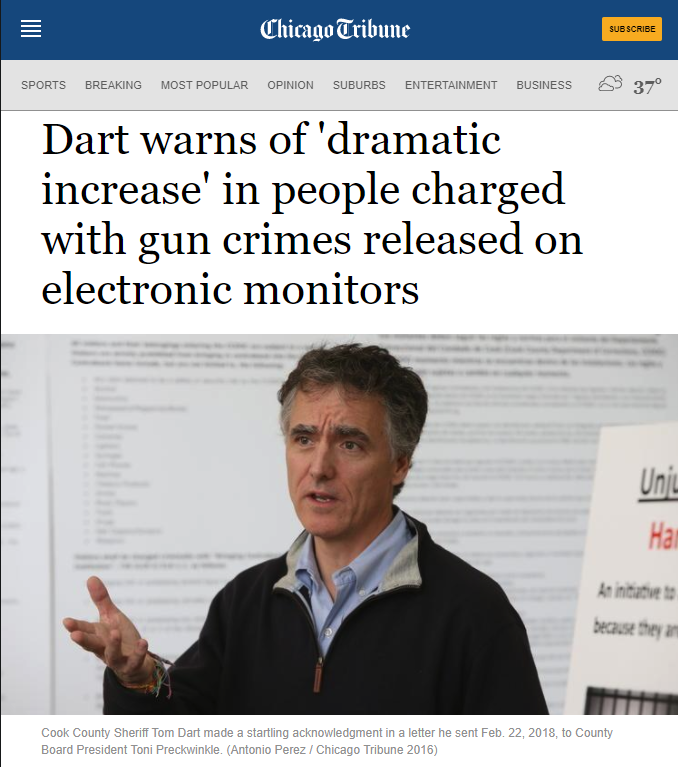 Cook County Sheriff Tom Dart is stoking public fear over local efforts to decrease the use of money bail and reduce the jail population, arguing that these measures allow gun “offenders” to go free and therefore pose a threat to public safety. Despite the fact that Dart has presented zero evidence to substantiate his fearmongering, Chicago’s largest press outlets are dutifully reporting his claims as fact, inserting them into the public conversation following the Parkland, Florida, high school shooting that left 17 dead. Reporters are going well beyond stenography to pad the sheriff’s arguments, including dredging up sympathetic quotes from a dead police officer.

The stakes are not academic: Pretrial detention is a major driver of mass incarceration in the United States. Roughly two-thirds of local jail populations at any given time are incarcerated before trial or conviction, with those incarcerated in local jails accounting for roughly a quarter of the total population behind bars in the country. Just a few days in jail can cause people to lose their homes, jobs, custody of children and even lives. By demagoguing the movement against cash bail, the Chicago press is helping to build the case for condemning thousands to preemptive punishment before they face a jury, much less are found guilty.

Dart’s public relations blitz comes five months after a September 2017 order by Cook County Chief Judge Timothy Evans instructing all Cook County judges to stop setting money bail above amounts that people can afford to pay. The instruction followed litigation and years of local organizing to end money bail in a county that houses one of the largest jails in the United States. At the end of 2016, roughly 95 percent of the 8,000 people locked inside Cook County jail were incarcerated before facing trial or conviction—some languishing for years—the majority simply because they were too poor to pay bail. While the chief judge’s order has yet to completely end the practice of wealth-based incarceration, it has played a role in lowering the jail population to roughly 6,100—effectively restoring the presumption of innocence for some of the jail’s disproportionately black population.

Just eight days after the Parkland massacre, Dart wrote an open letter to the president of the Cook County Board of Commissioners that he circulated to media outlets, sounding the alarm that bail reform is allowing people with “gun charges and other violent offenses” to be released back to their communities, where they ostensibly pose a threat. His letter quickly garnered breathless articles in the Chicago Tribune (2/23/18) and Chicago Sun-Times (2/22/18)—the city’s two biggest papers—repeating the sheriff’s talking points about the supposed threat posed by gun defendants who are released or placed on electronic monitoring. 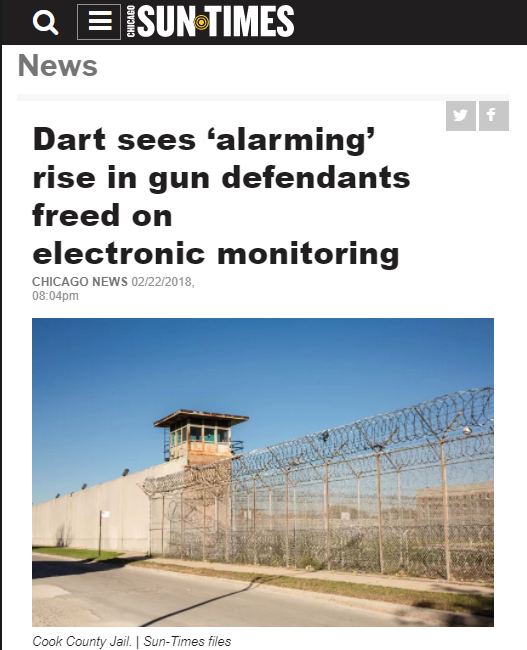 Dart’s claims rest on an internal study conducted by the Sheriff’s office, looking at just 261 defendants in 2016 and 322 in 2017, showing that after the chief judge’s order, more people accused of carrying (but not using) guns are being placed on electronic monitoring. Sun-Times reporter Frank Main summarized the findings:

Over a three-month period in late 2016, nearly all of the gun defendants who passed through the courthouse got a “D” bond, meaning they had to put up 10 percent of a cash amount to make sure they’d return to court. But half of the gun defendants in late 2017 were either released on electronic monitoring or on “I” bonds that don’t require them to put up any money, the sheriff’s study showed.

Yet Dart’s numbers contain no information about how these individuals impacted their communities once they returned. In fact, the general usefulness of this data is questionable, given that the number of cases evaluated is very low compared to the thousands of people about whom judges make bail decisions every month. To date, no government body or private institution has conducted a systematic review of the public safety impact of Chief Judge Evans’ order. Without a shred of evidence, Chicago’s major newspapers take for granted that people with gun charges pose a threat when they return home. As Trump fear-mongers over the armed, black menace in Chicago’s streets, residents charged with possessing guns make easy bogeymen for reporters.

In an alarming passage, Main wrote that Dart’s aides

said they suspect that gun defendants are committing new firearm offenses while on electronic monitoring and out on I bonds. But the aides say they don’t know the extent of the problem. That’s because few shooters in Chicago get caught. The Chicago Police Department made arrests in fewer than 5 percent of nonfatal shootings in 2016, records show.

In other words, Main is casually insinuating that individuals released as a result of bail reform are murdering people—while acknowledging that there’s no evidence that this is the case.

Remarkably, Main concluded his article with these baseless murder accusations, even after briefly acknowledging official court data from Chief Judge Evans’ office that raised serious questions about the suspicions of the sheriff’s office. According to Evans’ own evaluation of defendants with weapons-related charges between October 1, 2015, to March 31, 2017, “Out of 20,243 defendants released while their case was pending, 151 (0.7 percent) were charged with a new violent crime.” This conclusion was drawn from a much larger and more comprehensive data sample than Dart’s own, which was generated by the irregular courtwatching efforts of his own staff.

The Chicago Community Bond Fund (a group that I volunteer for) has over the past two years posted bail for 32 people with gun-related charges, and none of them have been re-arrested on weapons charges. Some of those individuals suffered staggering pretrial punishment for being accused of holding a gun, only to be found not guilty once their case went to trial. The Bond Fund documented the case of one young black man who was painted as a dangerous criminal merely because a police officer claimed that a bulge under his shirt concealed a gun. That young man was eventually found not guilty, but only after losing eight months of his life to incarceration in Cook County Jail and house arrest.

In 2016, according to data from the Cook County State’s Attorney’s Office, just 42 percent of gun defendants tried by juries were convicted, as were only 30 percent who faced bench trials. Not only are arrestees supposed to be presumed innocent, a majority of those who go to trial actually are found to be innocent once the evidence is heard.

Yet that reality does not stop local press from depicting people accused of carrying a gun as monsters who are already guilty of some vague kind of violence. In a stunning passage, Chicago Tribune reporter Megan Crepeau (2/23/18) cynically concluded her piece about Dart’s latest findings by quoting Cmdr. Paul Bauer, a police officer recently shot and killed:

As commander of the Near North District, Bauer had recently spoken out about his frustration over the bond reform effort and the difficulty in keeping repeat offenders off the streets.

“We’re not talking about the guy who stole a loaf of bread from the store to feed his family,” Bauer said in November, according to the Loop North News. “We’re talking about career robbers, burglars, drug dealers. These are all crimes against the community. They need to be off the streets.”

This quote from a dead police officer who was not particularly qualified to comment on Cook County’s pretrial legal system is a naked attempt to manipulate emotions, coming not long after the city held a much-publicized funeral for Bauer. If the words of the deceased are to factor into this debate, it is not clear why Crepeau did not investigate the political positions of individuals who died as a result of incarceration. There is no shortage of surviving loved ones for reporters to reach out to: In 2017 alone, at least 22 people died in the custody of Cook County Jail. 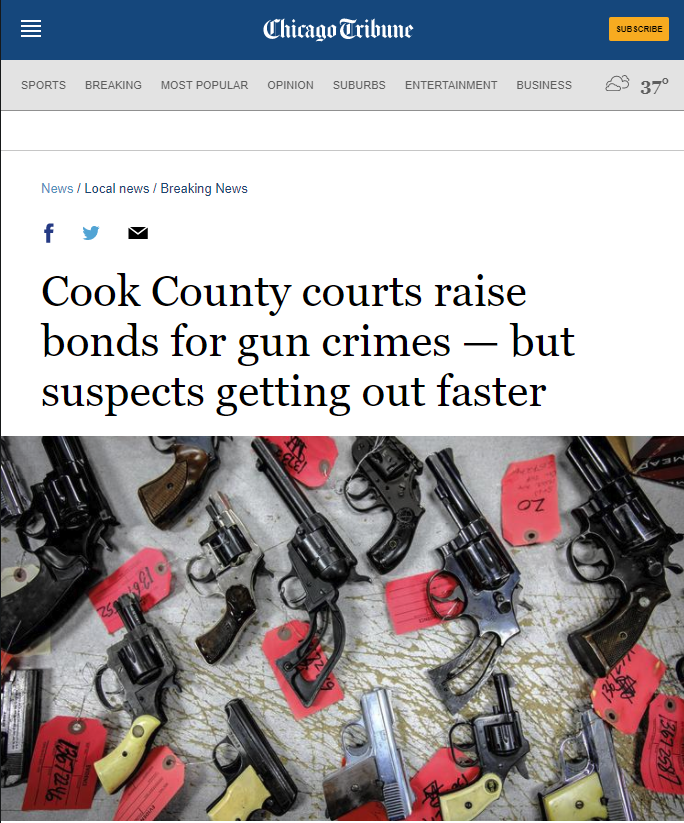 This is not the first time Chicago press has stoked fear that freeing people from jail while they are awaiting trial threatens public safety. In 2017, Chicago Tribune reporters Todd Lighty, David Heinzmann and Jason Grotto (1/28/17) warned that gun “suspects” are getting out of jail faster:

Since 2012, the median amount of bond set by Cook County judges for people charged with felony gun crimes has doubled — from $25,000 to $50,000. But over the same time period, the average number of days a defendant spends in jail before posting bond for a gun charge has fallen by more than half, from 42 to 18 days, according to the Tribune analysis.

It’s peculiar enough that a major paper would implicitly treat people convicted of no crime spending less time behind bars as a bad thing. Beyond that, their analysis only looked at the cases of individuals who bailed out, meaning the reporters disregarded the vast majority of the Cook County jail population, who are incarcerated right up until their trial because they can’t afford to pay bail.

This accumulated media spin is important, because Dart is attempting to build public support for a bill that would increase judges’ power to incarcerate people pretrial—and not incidentally maintain his own budget, which is threatened by too large a drop in the jail population. While Dart has marketed himself as a “progressive” sheriff, and has even railed against the injustices of money bail, he appears to be capitalizing on public fear over mass shootings to expand the county’s powers to impose pretrial punishment. As Crepeau  (2/23/18) wrote:

Dart said Thursday the dramatic increase has overwhelmed the office’s electronic monitoring program, leading him to take immediate steps to shore up those efforts: shifting staff, making unannounced searches of the homes of those being monitored, conducting a more thorough vetting process and, if necessary, declaring detainees too risky for the bracelets altogether.

The reporters don’t raise questions about the fact that Dart appears to be second-guessing, and even outright rejecting, orders made by judges to release people pretrial.  (As this article went to press, attorneys announced that people currently held in Cook County Jail are filing a class-action lawsuit against the sheriff, charging that he is unlawfully detaining people who Cook County judges had ordered released pretrial.)

As the Chicago Community Bond Fund has documented, electronic monitoring and other forms of pretrial punishment violate the presumption of innocence and expand the harms of incarceration far beyond Cook County Jail’s walls. The organization has pointed to people becoming homeless, losing jobs and family support, and returning to jail as a result of restrictive pretrial conditions. Dart’s latest publicity push, aimed at expanding law enforcement’s powers to search private homes, visit job sites and further constrain movement, would only worsen these harms.

Ultimately, any media discussion of public safety must examine the dangers posed by pretrial incarceration and punishment. The disproportionately black and poor people who fill Cook County Jail, after all, are part of the public that officials purport to protect—and their safety and wellness also matter, regardless of what charges they face.