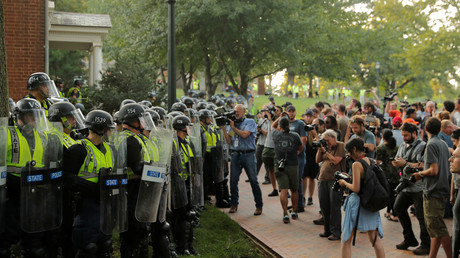 Besides some verbal confrontations between riot police and demonstrators, a rally in Charlottesville marking the anniversary of last year’s deadly clash between right- and left-wing activists passed without any major incident.

Here we go again! US lawmaker says he was told Moscow played role in Charlottesville riots

Authorities had carefully planned for Saturday’s event in Charlottesville, which last year became the scene of the Unite the Right rally’s clash with the leftist Antifa protesters. Deploying riot police along the security perimeter, law enforcement went on to erect concrete barriers and metal fences before setting up entry points with metal detectors to screen rally participants.

To avoid a repeat of last year’s scenario, when a violent white nationalist rally’s clash with the left resulted in one death and dozens of injuries, Charlottesville authorities refused to grant a permit for another ‘Unite the Right’ rally. In addition, Gov. Ralph Northam declared in a state of emergency in the city and ordered the Virginia National Guard to be on standby should any riots arise.

The security measures seemed to have worked as most of the Saturday’s events proceeded in a peaceful manner. Attended mainly by opponents of white supremacists and more mainstream conservatives, the progressive activists carried a large banner through the downtown of the city reading: “Good Night, White Pride.” Others paused to light candles or place flowers at the memorials.

The most intense moments occurred in the evening at the University of Virginia campus at the ‘Rally for Justice’, where a group of some 200 Antifa activists shouted at riot police lines, “Black Lives Matter!” and “No Nazis, No KKK, No Fascist USA!”

Throughout the day, only three people were arrested on misdemeanor charges, one for trespassing, one for disorderly conduct and one for possessing a prohibited item, the city said.