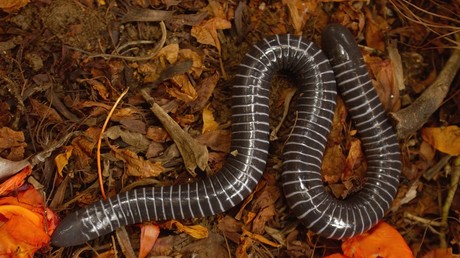 A blind, wormlike, dirt-burrowing amphibian has been named after US President Donald Trump in a dig at his climate change policies (or lack thereof) after the CEO of a sustainable building company won an auction for the privilege.

The sightless creature, discovered in Panama, will be named Dermophis donaldtrumpi thanks to EnviroBuild CEO Aidan Bell, who purchased the privilege for $25,000 in a charity auction to benefit the Rainforest Trust.

The species name is official, and scientists will use it when they publish their discovery in the literature, assuming it passes peer review. As for the worm, it is a member of the caecilian family, which includes more than 200 species that live most of their lives underground – quite the opposite of the publicity-fueled Trump.

“It is the perfect name,” Bell said. “Caecilian is taken from the Latin caecus, meaning ‘blind’, perfectly mirroring the strategic vision President Trump has consistently shown towards climate change.”


Bell, who insists his London-based company isn’t “overtly political,” nevertheless couldn’t resist getting in a few more jabs at Trump in a blog post. “The dermophis genus grows an extra layer of skin which their young use their teeth to peel off and eat, a behavior known as dermatrophy. As a method of ensuring their children survive in life Donald Trump prefers granting them high roles in the Oval Office,” he wrote.

A UN report in November cautioned that humanity has less than 12 years to change its behavior to avert catastrophic climate change. A climate assessment issued by the US government agreed, adding that the impact of climate change is already being felt. Trump, however, maintained his skepticism of the report produced by his own administration.

Dermophis donaldtrumpi is oddly enough not the first new species to be named after the US president – that honor went to Neopalpa donaldtrumpi, a yellow-crowned twirler moth discovered last year, whose distinctive head markings bear a resemblance to Trump’s dubiously authentic hair.