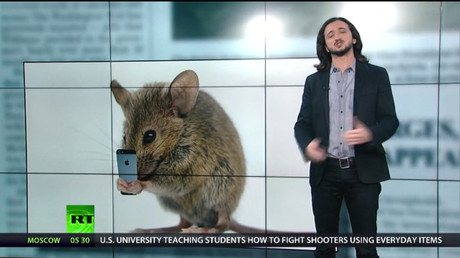 This week, host Lee Camp has some sad news for selfie addicts and chatterboxes everywhere: cellphones do, in fact, cause cancer. A $25 million study this year confirmed the link, by testing rats exposed to cellphone radiation.

Another decades-old scientific study found that these ubiquitous devices can cause rare neuro-epithelial tumors and “functional genetic damage” to users. So did the wireless industry address these concerns? Nope. The industry buried the results and pressed on with development of 5G networks, coming soon, and described as having a potential “weapons grade” effect on public health.

Lee then talks about the weedkiller company Monsanto which also worked hard to cover up their products’ cancer-causing side effects. “By now you’re seeing a trend,” Lee said. “It seems like Monsanto has known for years that Roundup causes cancer. And yet they did everything they could to cover up the studies.

Acts of corporate evil are just the tip of the iceberg on this week’s Redacted Tonight. Watch below and find out more about war crimes at the Mexican border, mercenary war in Yemen, Walmart’s war on small-town America, and medical devices spying on hapless patients: