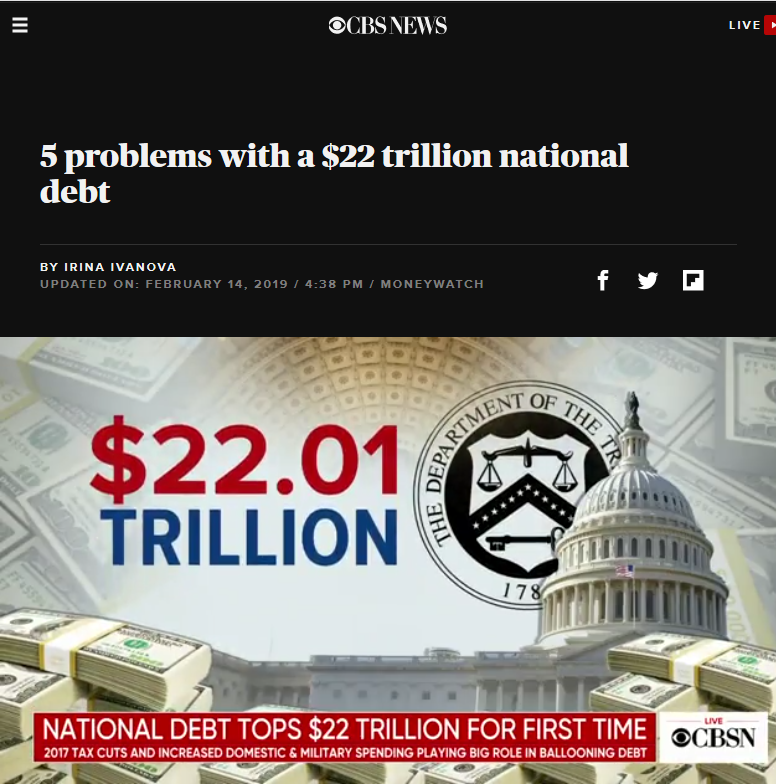 CBS News had a piece warning its audience about the problems of large government debt. It noted projections of rising US government debt, commenting:

The only countries with a higher debt load than the US are Portugal, Italy, Greece and Japan. The first three have become synonymous with profligate spending and economic woes post–Great Recession, while Japan’s “lost decade” of economic stagnation is a mainstay of economic textbooks.

The first three countries are all in the euro zone. They do not have their own currency, but rather must adhere to rules set by the European Central Bank and the European Commission. Their situation is comparable to that of a state in the United States. No one disputes that it would be a big problem for Utah or California to run up very large debts.

Japan is the country most comparable, but the textbooks CBS refers to seem not to be very reliable. According to the IMF, Japan’s per capita GDP has increased by an average rate of 0.9 percent annually between 1990 and 2018; while this is somewhat less than the 1.5 percent rate in the United States, it is hardly a disaster. In addition, average hours per worker fell 15.8 percent in Japan over this period, compared to a decline of just 2.9 percent in the United States.

In spite of having a debt to GDP ratio that is more than twice as large as the US, Japan does not provide evidence to support the warnings CBS gives about large deficits. Its long-term interest rates are near zero, meaning the debt is not crowding out investment. Its interest payments on its debt are roughly 0.5 percent of GDP ($100 billion in the United States), indicating that they are not crowding out other spending priorities. And its inflation rate is just over 1.0 percent, indicating that profligate spending has not led to a problem with inflation.

Dean Baker is a senior economist at the Center for Economic and Policy Research in Washington, DC. A version of this post originally appeared on CEPR’s blog Beat the Press (2/14/19).

Messages to CBS may be sent here (or via Twitter @CBSMoneyWatch). Please remember that respectful communication is the most effective.