If there was a more prolific defender of the free market after the 2008 financial crisis than Bob Murphy, I don’t know who it was.

During those crucial months, in which so many erstwhile supporters of the market economy defected to the Establishment, Bob refused to allow the conventional wisdom – namely, that the crisis showed capitalism and “deregulation” didn’t work – to go unchallenged. Day after day he wrote articles and blog posts striking down common fallacies and providing the libertarian world with the intellectual ammunition to respond to a veritable avalanche of myth-making and error. 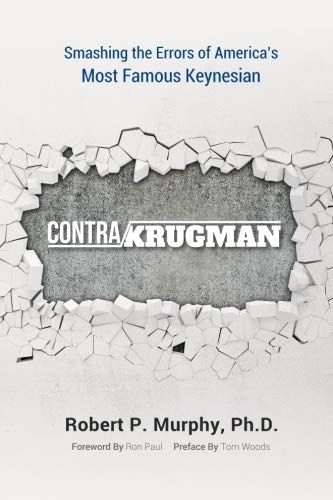 Of course, by virtue of his positions as a New York Times columnist and honorary chief Keynesian of the United States, Paul Krugman was responsible for much of the error Bob had to refute.

I’ve been delighted to speak at numerous events alongside Bob over the years, and I’m just as delighted to introduce this masterful collection to you. He is a tremendous asset to the liberty movement, and you.

“Will be glad to get to know his work.”