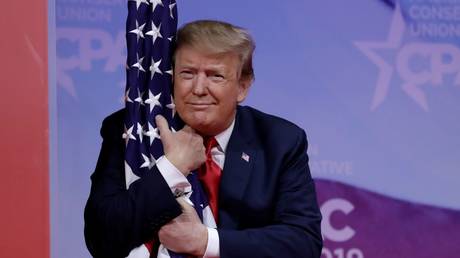 Donald Trump’s impromptu embrace of the America flag as he appeared onstage at the 2019 Conservative Action Conference has triggered a flurry of social media commentary, ranging from enthusiastic applause to cries of fascism.

“God Bless the USA” was blasted over the speakers as the US president sauntered up to the podium before his address to the annual GOP gathering – but Trump apparently wanted to make it crystal clear that he loves his country. Standing next to an American flag near the back of the stage, the president decided to briefly snuggle with the stars and stripes, grinning and rocking the flag back and forth as he soaked in a standing ovation from the audience.

The move predictably sent Twitter into a tizzy, with snarky memes competing with comments of support.
“It was a big hug to the American people. God bless president Trump,” one Twitter user gushed.

It was a big hug to the American people. God bless president Trump. 🗽💝

“Gotta love him… he really loves America,” another supporter wrote.

American Conservative Union Chair Matt Schlapp, who was onstage with Trump when it happened, described the incident as a “CPAC classic.”

Plenty of social media users mocked the move, however.

“He thinks it’s Putin or Kim,” wrote one netizen.

“Can the flag sue for harassment?” another member of the Twitteratti inquired.

Can the flag sue for harassment?

Others took part in the obligatory parade of snarky meme-responses.

But for some, the hug wasn’t anything to joke about.

“I learned in the Boy Scouts 40 years ago that the flag is something to be respected and treated with solemnity. This is not solemn or respectful,” wrote Twitter user ‘Speed Gibson’.

I learned in the Boy Scouts 40 years ago that the flag is something to be respected and treated with solemnity. This is not solemn or respectful.

In fact, the embrace may even be a sign of looming fascism in the United States, one blue-checkmarked pundit mused.