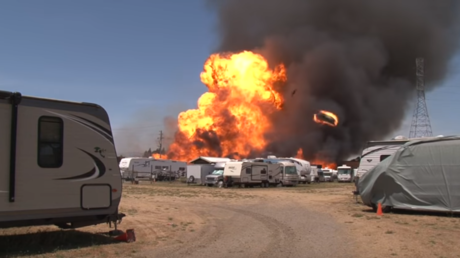 A photographer has captured his own narrow brush with death when a propane tank exploded while he was filming in California.

The footage shows the 1,000 gallon propane tank exploding in real time, followed by a slow-motion version and a glimpse of the tank on a road after it had been propelled 500ft from the scene by the fireball. The California Highway Patrol later closed the road prior to the tank’s removal.

The fire broke out at about 12:30pm local time Tuesday, sending plumes of black smoke into the Sonoma sky. The incident prompted the evacuation of about 500 residents within a half mile of the pallet company.

Three local fire stations and a California Forestry and Fire helicopter were deployed to battle the blaze. The evacuation was lifted at 2:50 pm local time. According to local media reports, the fire appeared to start at the back of the property. Police are now investigating its cause.

The fire burned about 10 percent of the business operation, causing about $200,000 worth of damage, the Santa Rosa Press Democrat reports.