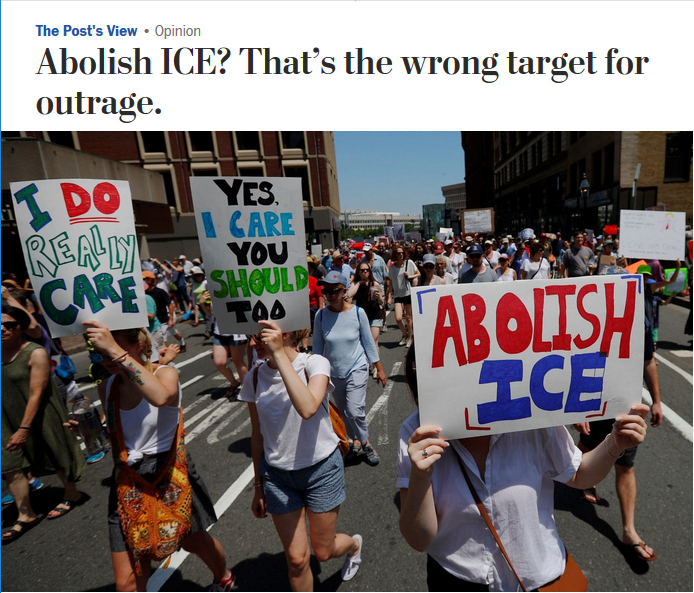 “Abolish ICE,” once a rallying cry for a small number of leftists and activists, has become a national slogan of dissent against the Trump administration and policies that target Latino communities. Tens of thousands of people have taken to the streets in cities across the US to call for an end to family separation, detention and deportation.

Despite this, corporate media decided to push the status quo—or at least a version of it without Trump as commander-in-chief. Of the 90 opinion pieces on the subject of ICE that were published in papers across the US from June 28 to July 18, 85 were explicitly against abolishing ICE, while only five were supportive.

Five of the ten top newspapers by circulation, including the Washington Post (7/5/18), USA Today (7/3/18), Newsday (7/10/18), New York Post  (7/4/18) and New York Daily News (7/6/18), published editorials that rushed to defend ICE and condemn a progressive stance. No Democrats have called for open borders, which would allow citizens and noncitizens alike to cross into or out of the US with few restrictions; at their most radical, they have called for rebuilding the US immigration system to be more humane. Even so, editorial boards urged Democrats to stick to a moderate work-within-the-system approach. ICE, which was created in 2003 in response to the September 11 attacks, was repeatedly hailed as a necessary agency that is unfortunately being manipulated by Trump for his own agenda. The Washington Post’s editorial board relayed this message:

The problem with ICE isn’t its existence or its mission. It’s that the Trump administration, in its xenophobic zeal, has weaponized it to go beyond protecting the United States and into the darker realms of oppression. 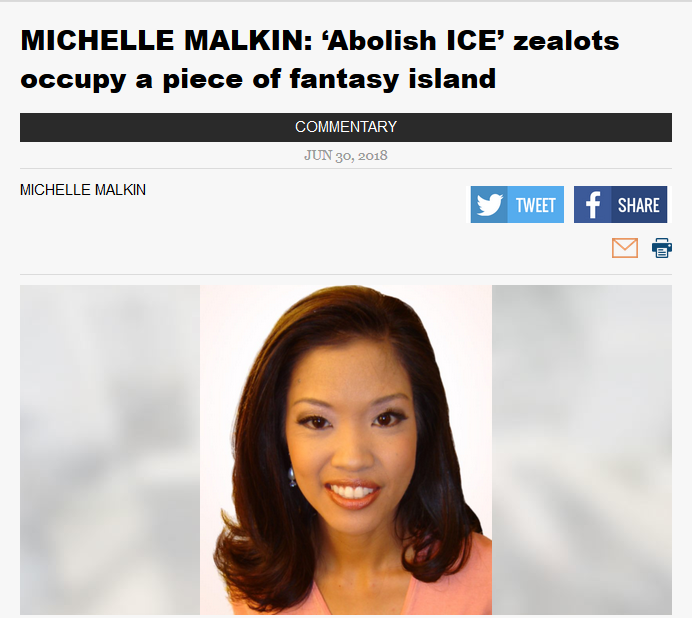 Michelle Malkin thinks abolishing ICE is a bad idea (Fort Wayne News-Sentinel, 7/20/18)–but then, she thinks putting Japanese-Americans in concentration camps was a good idea.

Fifty-nine of the 90 published opinion pieces were signed columns rather than unsigned editorials. Forty-four percent of these columns were written by Republicans or self-described conservatives, and 11 percent by Democrats or self-described liberals. Rich Lowry, editor of the conservative magazine National Review, and right-wing author Michelle Malkin were the most published columnists on the subject of abolishing ICE, with both of their columns appearing six times in various publications.

Though the number of Democrats who wish to see dramatic changes to immigration policy is small, the response from editorial boards and columnists was resounding. Even op-eds that weren’t from self-identified conservatives argued that progressive stances would result in Democratic losses in the upcoming midterm elections. USA Today (7/3/18) contended that problems with the US immigration system stem from Trump, not ICE or any systemic problems. The editorial board called for Democrats to turn their grievances toward the president:

Ultimately, however, the push for inhumane immigration positions isn’t coming from ICE. It is coming from the White House. If Democrats want a less cruel immigration policy that will resonate with moderate voters, they should focus their energy on abolishing the Trump administration.

The urgency of the push to keep Democrats on a mend-it-don’t-end-it agenda is puzzling, considering again that those who support abolishing ICE are in the minority. Still, Alexandria Ocasio-Cortez’s stunning victory over Rep. Joe Crowley in a New York City congressional primary has shown some Democrats that there is the possibility for a more progressive immigration agenda. Two of the five supportive op-eds were written by Democratic officials, and one was written by a gubernatorial candidate. 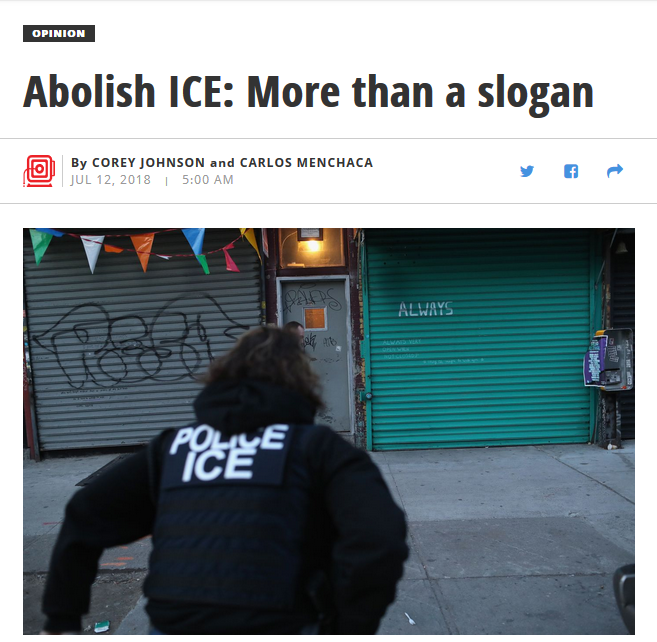 One of a handful of opinion pieces that supported rather than opposing the abolition of ICE (Daily News, 7/12/18).

One op-ed published by New York Daily News (7/12/18), written by New York City Council Speaker Corey Johnson and councilmember Carlos Menchaca, argued that ICE is not supporting public safety, and should be dissolved with its functions taken up by other agencies:

ICE is an indiscriminate deportation and detention machine, leaving families and communities broken, not safer. Its tactics, which spread fear throughout immigrant communities, fly in the face of one of our nation’s most hallowed and time-honored traditions as a beacon to those fleeing persecution and looking to build a better life.

Of the op-eds by those with identifiable ethnicities, this was also the only one written by a Latino; Menchaca is the chair of the New York City Council’s Immigration Committee.

Many have expressed dissent at the way the US handles immigration–from government officials to activists, civil rights advocates and immigrants themselves. Grassroots organizations have spoken against ICE tactics long before Trump became president. Yet corporate media chose to publish only a handful of these voices. The debate among editorial boards and columnists was focused on fear of Democratic Party extremism, rather than the widespread impacts of ICE and immigration policy.