Janine Jackson interviewed Omar Farah about the Department of Homeland Security’s “Race Paper” on the March 23, 2018, episode of CounterSpin. This is a lightly edited transcript.

Janine Jackson: Listeners know the US government has a shameful history of surveilling and intimidating people engaged in First Amendment-protected acts of public protest or public criticism. Black activists have for decades been victims of campaigns to demonize, harass and discredit them and their movements.

So when racial justice groups—using the Freedom of Information Act to find out how the FBI and Department of Homeland Security are monitoring protests around police violence and the Movement for Black Lives—turn up a document referred to as the “Race Paper,” which, on receipt, turns out to be completely redacted, with not even the official title visible, it makes for a handy emblem…but just an emblem of a problem that’s far deeper and more worrying.

Joining us now to talk about the “Race Paper” and what it may tell us is Omar Farah, staff attorney at the Center for Constitutional Rights. He joins us now by phone, from here in town. Welcome to CounterSpin, Omar Farah.

Omar Farah: Thank you so much for having me.

JJ: The Center for Constitutional Rights and Color of Change have filed a lawsuit against the Department of Homeland Security to get at the contents of this memo, based on the references to it that you could see. What do you suspect they’re hiding?

OF: I think you have to start with the function of the agency that produced the report in order to get a sense of what it might say, and as you pointed out, it is entirely redacted. Every version of the document that we have is blacked-out, from the first word to the very last, and each report is roughly seven or eight pages. The sub-agency within the Department of Homeland Security that produced the report, and that itself calls it the “Race Paper,” is the Intelligence and Analysis Office, which is tasked with producing predictive intelligence and national security-related information that then gets funneled throughout the federal government. 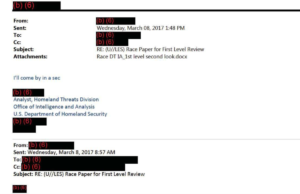 And so we are left with the unfortunate assumption that at least part of what this is is a counter-terror or intelligence-related assessment that somehow implicates the question of race. How that is, we obviously can’t say. But the two things together are enough to raise some very disquieting questions.

JJ: Let’s just unpack, a little bit, this idea of predictive intelligence. This is this idea where supposedly you have analytical frameworks or algorithms that can predict criminality?

OF: That’s one of the most pressing fears that I have, in speculating about what might actually be behind these redactions. Some of the emails that accompanied the transmission of the “Race Paper” within DHS I&A, the Intelligence and Analysis Office, included references to things like “drivers” and “indicators.” Now, I have to be perfectly honest: We just don’t know what the document says. But those terms, to me, in the absence of any other information, suggest ways in which law enforcement and intelligence agencies within the government have in the past tried to use indicators that would help them predict criminality or behavior.

Those things, of course, are invariably based on totally bunk analytical frameworks that ascribe behavioral tendencies to certain protected classes of people–by race, and oftentimes by religion, we’ve seen, in a national security context. Those are things that the public needs to be aware are potential uses of this “Race Paper,” and it certainly deserves full scrutiny.

JJ: I’m not sure that we should need to say that public protest is protected activity, that every day it’s more obviously an activity that we need to vigorously protect, and that calling for things to change—even if that means things, yes, including this police force that’s right in front of me as I’m protesting—calling for change is not a crime. 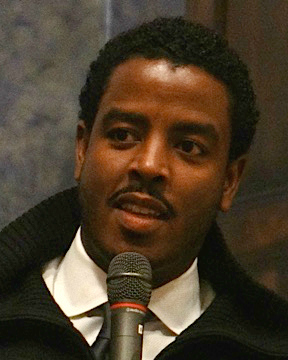 Omar Farah: “Black and brown voices for accountability and for change, and particularly around policing, have historically been viewed as deeply threatening.” (cc photo: Debra Sweet/World Can’t Wait)

OF: Calling for change is not a crime. It’s indispensable to the health of the democracy. But, as you know well, black and brown voices for accountability and for change, and particularly around policing, have historically been viewed as deeply threatening. And that is part of the overall context that prompted the Center for Constitutional Rights and Color of Change to initiate this FOIA, was the very real experience of people in the Movement for Black Lives and allied activists, recognizing that by speaking out about the crisis levels of police violence against black people, they were being targeted. And our effort was really to uncover the scope of that targeting, and to arm people in the movement with the information they need to resist the chilling effect that that has.

JJ: You hear people say that, “Well, if activists don’t commit any crimes, then really there’s nothing to worry about.” And that seems to miss something fundamental about the way that this happens, about the impact of this kind of surveillance.

OF: I couldn’t agree more. That is a framing that reads out of our history all of the ways that law enforcement has expressly targeted political speech, to raise the stakes associated with speaking out, to a point that just discourages people from doing it. It’s not about anyone’s individual criminality, or lack thereof. It’s about what it costs to get into the street and say, “Enough is enough. This has to change.” And if law enforcement uses race, religion or a particular political viewpoint as a proxy for criminality or threat, it just means that that many more of us are going to be reluctant to speak out when it’s absolutely necessary.

JJ: Well, a fully redacted document strikes me as not just bizarre, but as journalistic catnip. But as of now, I’ve seen write-ups in Gizmodo, The Intercept, Splinter, The Root, Wisconsin Gazette, News One, Blavity, RT, Mint Press, Color Lines…. I may have missed one or two, but, as of this morning, March 22, my search of mainstream media, so-called, found bupkis on this “Race Paper.” Am I missing something, that this is not an important story?

OF: No, I think it’s absolutely an important story. You’re touching on, I think, one of the equally troubling things that is a feature of the counter-terrorism/national security paradigm that oftentimes we find ourselves in these days. I mean, one of the bases that the Department of Homeland Security is using to claim their entitlement to black out the entirety of the “Race Pager,” is the National Security Act.

FOIA is a statute that encourages transparency, but it does give the government some exemptions that it can claim, if it thinks that something is too sensitive to be released to the public. And one of the ways that the government is using that, in this case, is to say, “This information in the ‘Race Paper’ implicates the National Security Act.” And so, unless you are the kind of journalist who sees this as catnip, and can’t resist asking more probing questions about what’s behind it, you’re left with just a totally blacked-out document. And, of course, that presents real challenges for reporting.

So it doesn’t surprise me that this is a story that hasn’t gained national attention just yet. I certainly hope that in the near future, a judge will see it our way, and suggest that at least some of that document can be segregated, some information can be disclosed to us, and that ends up being the thing that draws more eyes to this document.

JJ: We’ve been speaking with Omar Farah, staff attorney at the Center for Constitutional Rights. You can find their work online at CCRJustice.org. Omar Farah, thank you so much for joining us this week on CounterSpin.

OF: I really appreciate your interest in the story. Thanks a lot.