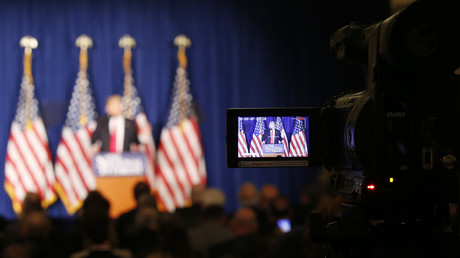 US President Donald Trump took aim at CNN again, saying the network portrayed the US to the world in an “unfair and false” way and suggesting the government could set up its own worldwide TV network.

“Throughout the world, CNN has a powerful voice portraying the United States in an unfair… and false way,” Trump tweeted on Monday afternoon, adding that “something has to be done.” One of the possibilities he suggested was the US government staring its own network “to show the World the way we really are, GREAT!”

….and false way. Something has to be done, including the possibility of the United States starting our own Worldwide Network to show the World the way we really are, GREAT!

The president’s critics chimed in by the thousands, slamming the proposal. Amid the calls to resign and talk of the Mueller probe and impeachment, those who actually stayed on topic offered such helpful rejoinders as “You already have Fox News.”

Quite a few commenters showcased their Cold War mentality by saying the proposal sounds “just like Russia” and even asking if Trump “got the idea from [Russian [president Vladimir] Putin.” Others in the online #Resistance compared the idea to Nazi propaganda machine of Joseph Goebbels, or its parody, the Federal News Network of the 1999 film ‘Starship Troopers.’

Hair Trump Declares that ‘Something Has to Be Done’ About CNN Exercising Free Speechhttps://t.co/1qjKeNRfyh

Only a handful of responses pointed out that what Trump is proposing already exists: it’s called Voice of America.

You can open up a radio station and call it Voice of America.

Apparently, the people freaking out on here have never heard of Voice of America, which was started under a Democrat president, and has been in existence for 76 years. https://t.co/khPafzRF6e

To be fair, VOA is just one cog in the massive machine, currently known as the US Agency for Global Media after the August 2018 rebranding. Before that, it was called the Broadcasting Board of Governors, and before 1999 it was the US Information Agency (USIA).

The agency claims it reaches an audience of 278 million people in 59 languages and more than 100 countries – as well as the US itself. Since Voice of America was established in the 1940s, the law prohibited the content created by this government-funded outlet from being broadcast inside the US. The Obama administration repealed that restriction in July 2013, making VOA and its sister networks’ content available domestically as well.