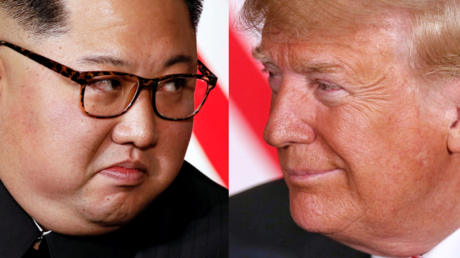 How do you woo arguably the most powerful man on Earth from half a world away? For North Korea’s Kim Jong-un, all it took was some “beautiful letters.” Now, US President Donald Trump is quite literally professing his love.

In all fairness, it wasn’t just the messages. The two shared a few “tough” moments before the love letters began. It remains unknown what kinds of displays of rugged manliness were involved, but Trump had some suggestive hints.

I was really being tough, and so was he. We would go back and forth… and then we fell in love, okay? No, really. He wrote me beautiful letters, and they are great letters. We fell in love.

Trump opened his heart at a MAGA rally in West Virginia in between bashing Democrats for stalling the Kavanaugh Supreme Court nomination and the habitual boasts about pulling the US out of the “worst ever” Iran nuclear deal.

To think, almost one year ago, in Trump’s first UN address, Kim was “Rocket man on a suicide mission,” and the US was standing ready to “totally destroy” North Korea. To think that one date in Singapore and a bunch of letters, however “beautiful,” could reverse that. Let’s just hope the two lovebirds don’t get the idea to compare their nuclear buttons up close next time they meet.

And somebody should probably tell Melania.