Modern-day enslavement of Britons in the UK is on the rise. A new report has singled-out the UK as one of the main destinations for trafficked workers in Europe, while highlighting the 362% increase in enslaved British nationals.

The report found that in the 12 months until March 2017, police in England and Wales recorded 2,255 modern slavery offenses, a fraction of the estimated picture of 13,000 provided by the Home Office, a figure the Independent Anti-Slavery Commissioner described to the BBC in January as “far too modest”.

The Gangmasters and Labour Abuse Authority (GLAA) report investigated the risks, threats and general trends in modern slavery in Britain, with data gathered from their extensive work with victims and offenders, as well as inspections at hundreds of workplaces.

Nationalities most likely to have their labor exploited were Vietnamese, Albanian and British nationals, with the latter increasing by 362% on previous numbers. The report noted that referrals of potential victims of slavery who were British increased to 393 in 2017 compared with 130 in 2015 and 2016 combined.

Other nationalities that noticed a spike in referrals include victims from Eritrea and Sudan, which the GLAA have highlighted as an emerging threat.

Ever heard of debt bondage? It’s where someone is forced to work to pay off debts they have no control over. Their wages and bank accounts are often controlled by the exploiter, who pays the workers’ costs, then withdraws their wages until their ‘debt’ is paid #modernslaverypic.twitter.com/a32C1JI1jE

Previously limited to tackling abuses in the agriculture, food and shellfish sectors, the scope of the GLAA remit has been extended to tackle instances of exploitation of workers employed in construction, warehouse and distribution, garment manufacturing, taxi driving, retail, domestic work, and social care. Other trends mentioned include the increased use of social media in the recruitment of victims and the use of ‘debt bondage’ to keep exploited workers under the control of their employers.

The report also used data provided by the National Referral Mechanism (NRM), a framework introduced in 2009 for identifying victims of human trafficking and/or modern slavery and ensuring they receive support.

The NRM found that in 2017, there were 5,145 potential victims of modern slavery submitted, an increase of 35% compared with 2016. Writing on Twitter, the GLAA said this represented that “many potential victims remain unidentified and vulnerable.”

Modern-day slavery is given as an umbrella term encompassing slavery, servitude, forced or compulsory labor and human trafficking. Globally it is estimated that there are over 40 million people affected by modern-day slavery. 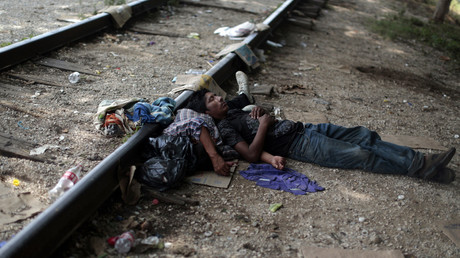 In May 2017, the GLAA was given new “police-style powers” to help tackle exploitation across the entire UK labor market.

In the 12 months since, it has: made 107 arrests; identified 1,335 abused workers; launched 181 investigations and searched 245 business; as well as identified £150k of withheld wages, and recovered £94k for victims.

Those found to be engaged in forced labor, which accounts for 30% of all exploitation, were EU nationals from Bulgaria, Czech Republic, Estonia, Poland, Romania and Slovakia. Romanian men in their 20s and 30s were most likely to have their labor exploited, with examples found across a wide range of industries including construction, agriculture, hotels and services, and garment manufacturing.

While face-to-face recruitment remains the primary method of trafficking and exploiting victims, the GLAA reports an increase in the use of social media as a recruitment tool for non-existing jobs. Victims find what appear to be genuine jobs online by completing simple searches such as “work in England”, with some sites promising jobs in the UK without the need to speak English. Facebook in particular is being used as a tool for making introductions between victim and exploiter, often in conjunction with Skype or Apple’s FaceTime.

The report found that victims recruited online are often not given many details of where the employment is and the terms of their employment, with these details being provided on arrival in the UK. These regularly turn out to be non existent.

Debt bondage is also being increasingly used as a tactic to keep victims in the UK. Victims are forced to work off debts they have no control over with their wages and bank accounts often controlled by the exploiter, who pays the workers’ costs, then withdraws their wages until their ‘debt’ is paid.

Ian Waterfield, Head of Operations at the GLAA said its successes “are a result of the close relationships we have with a vast range of partner agencies, businesses and charities. But there is much more to do. Slavery and exploitation continues to thrive in every town and every city and our dedicated workforce will continue to build on what we’ve achieved.”

Do you have suspicions around modern slavery? Contact GLAA’s helpline on 0800 432 0804 or report it online.