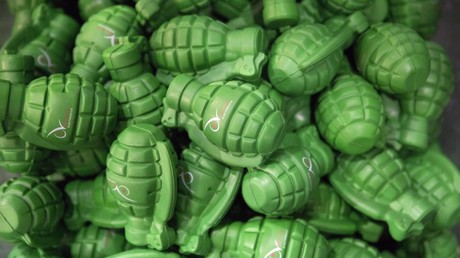 A toy grenade sparked an evacuation of the William P Hobby Airport in Texas after a Boy Scout brought the grenade through security.

Hobby Airport announced the TSA (Transportation Security Administration) security checkpoint was closed “due to a suspicious device being found during screening” on Thursday morning.

The TSA security line has been closed due to a suspicious device being found during screening. Please check with your carrier to see if your flight is being impacted by this delay. We will post updates as they become available.

Annnnd sometimes news finds me. Currently waiting for a flight at Hobby Airport … which has been evacuated for a suspicious device. pic.twitter.com/JTp7IQtcFg

The checkpoint was closed for 45 minutes so authorities could investigate. Passengers and staff were told to stay 200 feet from the checkpoint, and many on social media reported they were told to evacuate.

The Houston Police Department soon realized the grenade was hollow and called off the shut down. The 17-year-old Boy Scout was not detained, ABC13 reports.

Device has been removed, and TSA is re-opening the checkpoint and working to resume passenger screening. Expect some delays through security, and as always check with your carrier to see if your flight has been impacted. #fly2houston

“Device has been removed, and TSA is re-opening the checkpoint and working to resume passenger screening.” Hobby Airport announced on Twitter.

Now might be a good time for a gentle reminder that there are items you CANNOT bring through security checkpoints. Please double check this list before heading to ANY airport for a flight: https://t.co/0Ps4sWpruF

Complete nightmare at Hobby Airport after a 17 year old Boy Scout went through security with a fake grenade. Flights are delayed as 100s try to make it through TSA after a 45 minute shut down #KHOU11pic.twitter.com/PZfYHNdwXI

The airport said 12 Southwest Airlines flights were delayed and that Delta Airlines was experiencing one delay. It also tweeted a “gentle reminder” about what items are not allowed through airport security.

This is the second security scare at a Houston airport this week. On Wednesday, the bomb squad was called to investigate a suspicious bag at Bush Intercontinental Airport after a passenger said he had explosives in his bag. However, the airport later announced the passenger was simply impatient.