UK soldiers will patrol outside their base in Iraq as they take over from US forces for the first time since launching operations against ISIS. Almost 300 UK troops are stationed at Al Asad Airbase in Anbar province, west of Baghdad.

US troops are being deployed elsewhere, meaning the 270 soldiers from 2 Rifles will now patrol outside the wire. Troops will be at greater risk of attack from Islamic State (IS, formerly ISIS/ISIL) in the course of their duties.

Eight soldiers from a surgical team are being deployed and a team of 44 Royal Engineers will have their tour extended by six months as a result.

“As the nature of the coalition campaign changes, the role we play must adapt too,” said Sir Michael Fallon, the UK defence secretary.
Troops at the airbase are training their Iraqi counterparts how to cope in the field.

They are teaching them how to dismantle Improvised Explosive Devices (IEDs) and basic infantry skills.

The move echoes what is happening in Afghanistan, where the Taliban has recently made big gains as Western troops leave. 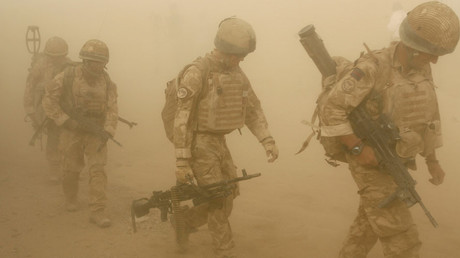 It comes as US President Donald Trump looks to reassert US power in the Middle East and return troops to Afghanistan. The president says NATO members must increase their number of troops.

There are currently around 11,000 US service personnel in Afghanistan and 4,000 from its NATO allies.

It is not clear how the UK will answer the call, since its army faces its biggest defense budget black hole in decades.

In Iraq, the move, which effectively puts boots on the ground, comes as the Ministry of Defense (MoD) says troops are in the “final” stage of the fight against IS.

After the liberation of Mosul, Iraq in June, Western troops have been helping clear targets along the Euphrates River Valley.

Currently, there are around 600 British soldiers in Baghdad and Iraqi Kurdistan, while the Royal Air Force (RAF) has carried our more than 1,600 airstrikes.

Fallon did not answer whether he supports calls by Rory Stewart, a foreign office minister, for all British IS fighters in Iraq and Syria to be killed rather than brought back to the UK for prosecution.

“Those who travel to fight with Daesh [Islamic State] in either Iraq and Syria will have been committing a criminal offence,” Fallon said.