A memoir by one of Obama’s top aides calls Boris Johnson Trump with “better hair.” The book says the comments on BoJo’s top mop came after the then-London mayor said Obama removed a bust of Churchill from the Oval Office.

The explosive memoir, entitled ‘In the World as It Is: A Memoir of the Obama White House,’ Obama’s deputy national security adviser and speechwriter Ben Rhodes details his years of domestic and foreign policy making, ending in the shock upset that was Donald Trump’s election victory in 2016.

In the book, Rhodes recalls a “hastily arranged” trip to London in April 2016 which was designed to bolster then-Prime Minister David Cameron’s approval rating, and argue the case for remaining in the EU. The trip came two months before the UK Brexit referendum. 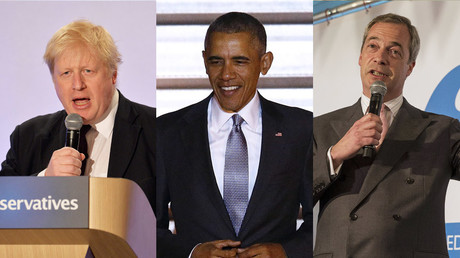 “It was unusual to coordinate so closely with a foreign government, but the Brits were different, and Brexit would be calamitous, a crucial piece of the post-world war two order drifting off into the sea,” Rhodes said.

Obama flew to London after Cameron’s chief of staff, Ed Llewellyn – who is now the ambassador to France – emailed Rhodes appealing for a presidential visit. Llewellyn apparently pointed out that Obama had an approval rating in the UK of over 70%, and the polls in Britain were finely balanced and could tip either way.

As part of his contribution to the Remain campaign, Obama published a pro-Remain piece in the Daily Telegraph to compliment his trip.

In turn, then-Mayor of London Boris Johnson published an opposing op-ed in the Sun. BoJo accused Obama of removing a bust of Winston Churchill from the Oval Office, attributing the move to “the part-Kenyan president’s ancestral dislike of the British Empire – of which Churchill had been such a fervent defender.”

At the time, Johnson’s comments were denounced by Labour politicians and dubbed “dog-whistle racism” by Shadow Chancellor John McDonnell. Johnson was then slammed by Churchill’s grandson, Nicholas Soames, who said he was “unreliable and idle about the facts.”

According to Rhodes, Obama was also taken aback by the racial undertones of the then-London mayor’s assault on the US president. “Really?” the president is quoted in the book as saying on being read Johnson’s comments. “The black guy doesn’t like the British?”

Rhodes then said to Obama that critics of America’s first African-American president were “more subtle back home.” The president is understood to have replied: “Not really… Boris is their Trump.” “With better hair,” Rhodes added.

At a joint press conference with then-PM Cameron during the whirlwind three-day UK visit, Obama went out of his way to refute Johnson’s claims made in the media about the removal of Churchill’s bust. Obama said that it had been moved to the entrance of his private White House study, known as the Treaty Room. “I love the guy,” Obama said.

Churchill’s place in the Oval Office was taken by a likeness of Martin Luther King.